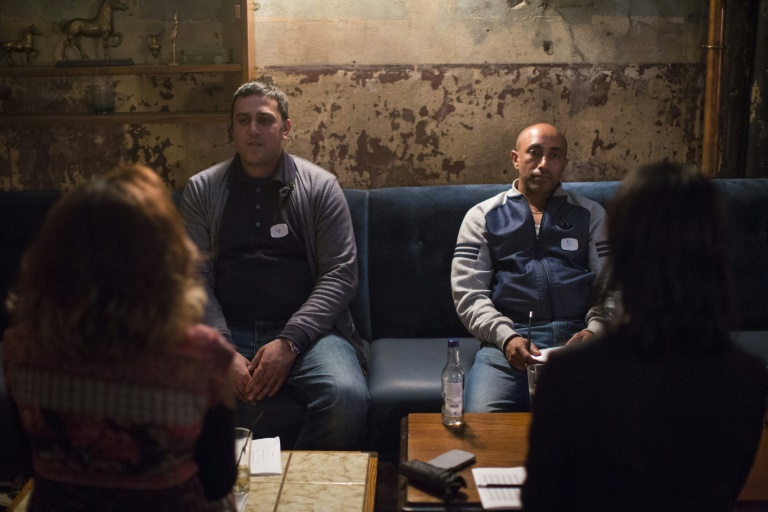 Candles and languid electro-jazz set the scene for a romantic rendezvous at a north London bar, but the couple sitting face-to-face can use only their eyes to beguile.

The 90-second silent date is the latest attempt by Londoners to reinvent the city’s intoxicating world of nightclubs, bars and fleeting liaisons.

It is the brainchild of Adam Taffler, actor and cultural entrepreneur, who got the idea during a visit to Australia.

“I was speaking with my girlfriend on the phone every few days and we were talking, but what we really enjoyed doing is at the end of the phone call we just stopped speaking to each other, we were just like there listening to each other breathing and it was beautiful,” he told AFP.

“It was so intimate we thought why don’t we try doing a dating event where people don’t talk and they just make eye contact. People don’t make as much eye contact as they used to,” added Taffler, sporting a dark jacket, white shirt, black beard and handlebar moustache.

He believes it is time to move beyond the world of words, which can often be used to conceal true personalities.

“With words we are presenting an idea of ourselves: this is who I say I am. But quite often we’re not saying what we really are,” he explained.

“You can see people as they really are because you’re looking into their eyes and that never lies”.

The “Shhh dating” event takes place in the basement of Farr’s School of Dancing, a vintage bar in the hip district of Dalston.

The decor is fashionably ragged, almost derelict, and the 1970s are conjured with red armchairs in imitation leather and an orange padded bar.

The walls are decorated with torn wallpaper and shelves of unusual gold objects — including a horse and a mill.

“I’m quite curious about not having to speak whether you have to compensate or do something else”, said graphic designer Jason Ribeiro, 33, wearing black trousers, a grey t-shirt and trainers.

There is an even gender split between the 30 hopefuls, who are mostly in their thirties.

They are there to have fun, but also to meet new people — a task surprisingly difficult in a city of 8.6 million.

“People tend to stay in their own circles,” explained participant Adrian Law.

As 7:00 pm arrives, Taffler kicks off the event with a stern warning of “no language to be spoken”.

Guests are invited to break the ice by shaking hands, before settling down for a series of games designed to build relationships.

Unable to speak, every gesture, smile and grimace is accentuated and communication is left to facial and bodily movements.

A muscle-bound man flexes his biceps to impress his sparring partner, who responds by adopting ninja positions.

Things get more serious in the evening’s second act as Taffler turns the music down-tempo with British group Cinematic Orchestra and the participants are given a minute-and-a-half in which to seduce.

Lucie, a teacher with long black hair, sits opposite a young man, hands on knees. She lowers her forehead, takes a deep breath before diving into the eyes of her partner with a fragile gaze.

“It was a nice experience,” she said. “We reached a level of closeness and intimacy that maybe you don’t get when people are talking and trying to impress each other”.

Further along, a statuesque blonde called India is weaving her web.

Her partner’s face betrays a mixture of admiration and lust, and he lets out a sigh when a bell announces the change of partner.

But sometimes, 90 seconds can seem like an eternity filled with contorted faces and shy glances.

As the evening draws to a close, the participants seem generally satisfied with their experience and make a note of those they wish to pursue.

The next time, talking will be allowed.