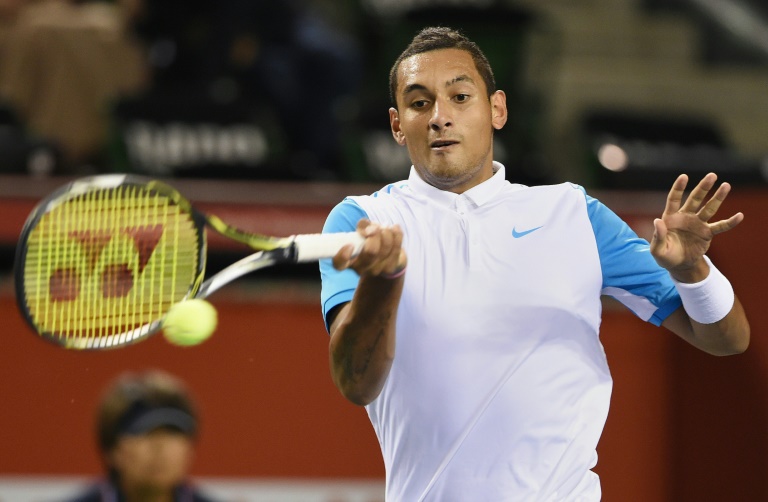 Australia’s Nick Kyrgios was slapped with a $1,500 fine on Tuesday for a foul-mouthed outburst at the Shanghai Masters, officials said, pushing him closer to a potential four-week ban.

Kyrgios was fined for an audible obscenity during his win over Andreas Haider-Maurer, when he was also heard calling the tournament a “circus” and complaining about the ball kids, according to reports.

The 20-year-old could trigger a 28-day ban if he incurs $5,000 in fines before next February, after he was given a suspended ban in August for his controversial insult against Stan Wawrinka.

Kyrgios received his second code violation in a week when he uttered an obscenity while criticising the surface at the Shanghai venue on Monday.

He is skating on thin ice, after incurring the suspended ban for making a sexual comment about Wawrinka’s girlfriend during their match at the Rogers Cup in Canada in August.

Following Monday’s match he maintained conditions were “crazy” at the Shanghai complex’s Grandstand court, where a cameraman was ejected for repeatedly talking during points.

“They were talking in the middle of the points. I was just expecting a lot more obviously from a Masters event,” Kyrgios said.

“You’re not going to see Roger (Federer) or Rafa (Rafael Nadal) playing on a court like that. They’re always playing on centre court where things usually go pretty smoothly,” he added.

“They’re not going to have the cameraman talking in the middle of the point on centre court.”

Things went more smoothly for Kyrgios and doubles partner Bernard Tomic on Tuesday as they beat Vasek Pospisil and Jack Sock to reach the second round.