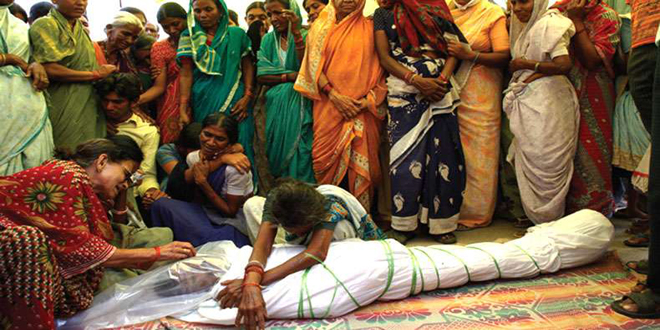 Two persons died after allegedly consuming pesticide along with their father and two brothers over a land dispute at Gollapally village in Mahbubnagar district, police said.

The incident took place yesterday and the victims have been identified as Srishailam and Mahesh, sons of Gaddam Venkataiah.

According Jadcherla Circle Inspector Giribabu, Venkataiah, a native of Golla Pally village, had purchased a plot of land there in 1989.

However, some people of a community society had started construction on the plot claiming it belonged to them. A dispute arose between Venkataiah’s family and the society members and a local political leader was acting as the mediator in the matter. However, Venkataiah felt that the leader was favouring the society.

“Venkataiah had become frustrated and, yesterday, went with his four sons — Srishailam (39), Mahesh (32), Chandhrashekhar and Kumar — to the politician’s house in Jadcherla.

“After an argument there, Venkataiah and his four sons consumed pesticide following which Srishailam and Mahesh died,” the police officer said.

The two brothers of the deceased duo were in a critical condition and have been taken to Hyderabad for treatment, police said, adding that Venkataiah is out of danger.

Srishailam’s wife Sumithra has filed a complaint with Jadcherla police against 12 people, including the mediator, in this connection, Giribabu said.