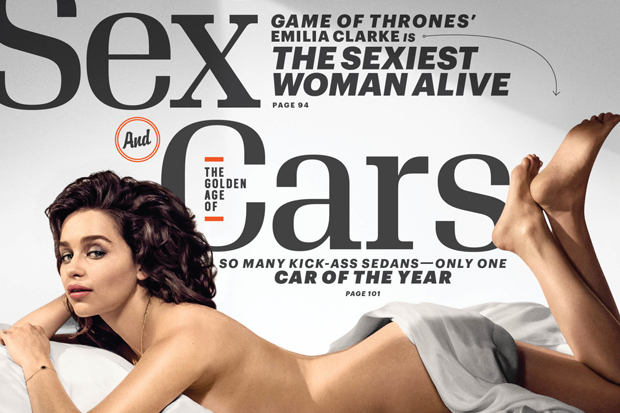 Emilia Clarke has another title to add to her long list.

The 28-year-old Londoner, who plays menacing, white-haired Daenerys Targaryen, aka Khaleesi, aka Mother of Dragons on “Game of Thrones,” is Esquire’s Sexiest Woman Alive. The magazine made the announcement early Tuesday, but GQ got there first, anointing Clarke Woman of the Year in September.

She can do fierce, but also friendly. She can be queen, but also kid sister, killer or girl next door, the magazine wrote in the Esquire story accompanying Clarke’s nude cover, belly down with bedsheet strategically placed.

In the Esquire feature Clarke talked about her initial audition for Thrones. “My agent told the casting director, ‘I know that the breakdown for this character is tall and willowy and blonde. I know she’s short and round and brown, but I’d like you to see her,'” Clarke said. “I had two scenes which told me nothing and not very much time in which to read all those books. So I did what every good actor does and Wikipedia’d the living crap out of it.”

The Sexiest Woman Alive title has been given out each year by Esquire magazine since 2004.

Just some of the names who have received it include Mila Kunis, Angelina Jolie and Halle Berry.