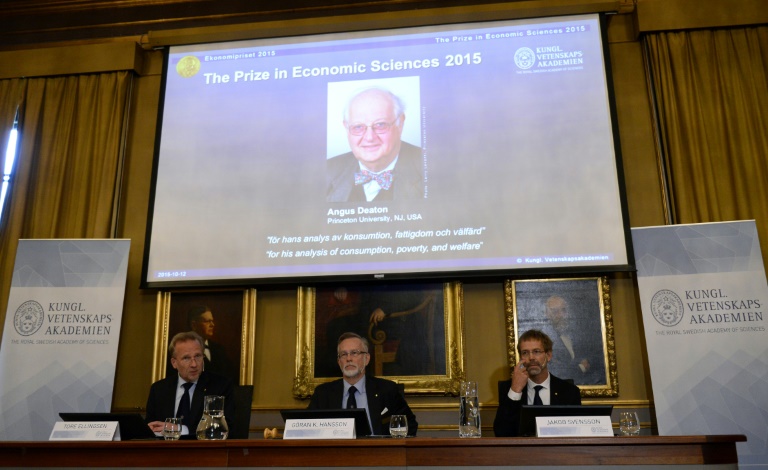 Angus Deaton of Britain and the United States won the Nobel Economics Prize on Monday for his work on consumption, poverty and welfare, the jury said.

“By emphasising the links between individual consumption decisions and outcomes for the whole economy, his work has helped transform modern microeconomics, macroeconomics and development economics,” the Royal Swedish Academy of Sciences said.

“To design economic policy that promotes welfare and reduces poverty, we must first understand individual consumption choices. More than anyone else, Angus Deaton has enhanced this understanding,” it said.

Deaton was honoured for three related achievements: for developing with his colleague John Muellbauer around 1980 a system for estimating the demand for different goods; studies of the link between consumption and income that he conducted around 1990; and the work he carried out in later decades on measuring living standards and poverty in developing countries with the help of household surveys.

Deaton, 69, has been a professor of economics and international affairs at Princeton University in the United States since 1983.

Deaton will receive his prize at a ceremony in Stockholm on December 10, the anniversary of the death of the prizes’ creator, Swedish scientist and philanthropist Alfred Nobel.

The economics prize is the only Nobel not originally included in Nobel’s last will and testament. It was established in 1968 by the Swedish central bank to celebrate its tricentenary, and first awarded in 1969.

The other prizes have been awarded since 1901.

Last week, the two most closely-watched prizes, those for literature and peace, went respectively to Belarussian writer Svetlana Alexievich and Tunisia’s National Dialogue Quartet, four civil society groups that helped rescue the only democracy to emerge from the Arab Spring.