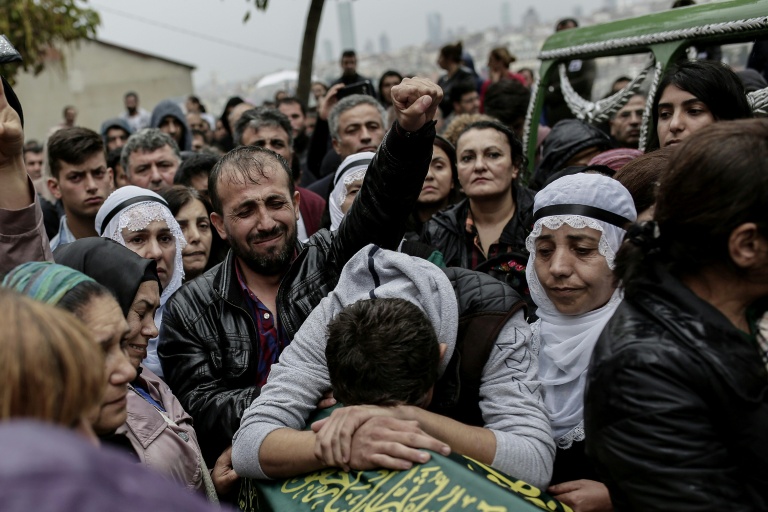 Turkish Prime Minister Ahmet Davutoglu on Monday said the Islamic State (IS) extremist group was the prime suspect in the double suicide bombings in Ankara that killed 97 and sparked anger over the authorities’ failure to ensure security.

In his first interview since Turkey was scarred on Saturday by its deadliest ever attack, Davutoglu insisted that a snap election would go ahead as planned on November 1 despite the bloodshed.

The attack on a peace rally of leftist, labour and Kurdish activists ratcheted up tensions to new heights in Turkey as the government wages a relentless campaign against Kurdish militants and also battles IS jihadists.

“Looking at how the incident took place, we are probing Daesh as our first priority,” Davutoglu told NTV television, using an alternative Arabic acronym for IS.

“We are close to a name (for one bomber). That name points to an organisation,” he said.

But this has sparked an angry reaction from the pro-Kurdish Peoples’ Democracy Party (HDP), which strongly disputes the official death toll and has released the names of 120 victims, claiming eight more have yet to be identified.

Turkey was long accused by its NATO allies of not taking a tougher line against IS as the group seized swathes of northern Iraq and Syria and battled Kurdish militias.

However after months of Western pressure, Turkey is now a full member of the US-led coalition against IS and allowing American jets to use its Incirlik air base for raids, making it possibly more vulnerable to attack.

With international concern growing over Turkey’s stability, German Chancellor Angela Merkel was to visit Sunday to discuss Turkey and Syria, a spokesman said.

Rallies in the wake of the bombings have been hugely critical of President Recep Tayyip Erdogan, with demonstrators chanting slogans like “Erdogan murderer” and accusing the government of failing to prevent the attacks.

“We lost many friends. But the government must know that we will not step back. We will continue to fight and will fight even harder,” union activist Vassaf Turgut told AFP in Ankara.

But Davutoglu denied there had been any security or intelligence failure and dismissed fears Turkey could be facing civil war.

“This attack will not turn Turkey into Syria,” he said.

In his first reaction to the violence, Turkey’s leading writer Orhan Pamuk in an interview with Italian daily La Repubblica warned of sectarian conflict and blamed Erdogan for the insecurity.

Erdogan, in a written statement, has condemned the “heinous” attacks as an attempt to break the country’s unity.

However the Turkish strongman has remained uncharacteristically silent in public since the attacks. On Monday was holding closed door meetings with officials including with spy chief Hakan Fidan, army head Hulusi Akar and Davutoglu.

The attacks came with Erdogan under huge political pressure as Turkey heads into the November 1’s snap election.

His ruling Justice and Development Party (AKP) failed to keep its overall majority in June 7 polls and then could not form any coalition.

Erdogan called a repeat election for November 1 but opinion polls are showing that that the result appears likely to be much the same as before.

Some commentators suggested that the Ankara attack could prompt the government to postpone the polls but Davutoglu insisted they would go ahead “under whatever circumstances”.

AKP spokesman Omer Celik said that the party had cancelled all campaign rallies until Friday and thereafter would hold “anti-terror” unity rallies.

Turkish media said investigators believe the type of bombs used in Ankara were similar to the one used in a July 20 suicide bombing in the town of Suruc on the Syrian border that killed 34 also mostly Kurdish and leftist activists. That attack was quickly blamed on IS.

The Hurriyet daily reported that the authorities had taken DNA samples from families of 16 people suspected of being members of the IS group.

They are also examining the theory that the missing elder brother of the Suruc suicide bomber Abdurrahman Alagoz could have carried out one of the suicide attacks, it added.

Turkish authorities have since Sunday arrested over 40 suspected members of IS across the country, but it is unclear if the raids had any link with the Ankara attacks.

The Suruc bombing caused one of the most serious flare-ups in Turkey in recent times as the PKK accused the government of collaborating with IS and resumed attacks on the security forces after a truce of more than two years.

The military hit back, launching a “war on terror” against the Kurdish militants.

The PKK on Saturday announced it would suspend all attacks — except in self defence — ahead of the polls.

But the Turkish army kept up its campaign with more air raids killing 17 suspected militants in the southeastern Hakkari region on Sunday, state media said.