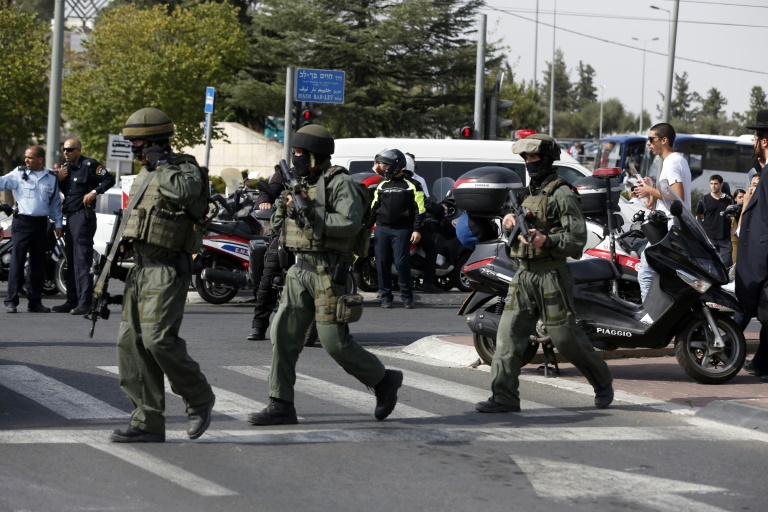 Three new stabbings in Jerusalem and a car attack spread more fear among Israelis on Monday as Palestinian unrest showed little sign of slowing after nearly two weeks of violence.

Frustrated Palestinian youths have defied president Mahmud Abbas as well as an Israeli security crackdown by rioting in annexed east Jerusalem and the occupied West Bank, while 18 stabbings having targeted Jews since October 3.

There have been warnings of the risk of a full-scale Palestinian uprising, or third intifada.

Stabbing attacks have killed two Israelis and wounded around 20.

In Monday’s first stabbing, an 18-year-old Palestinian identified as Mustafa al-Khatib attacked a policeman with a knife at an entrance to Jerusalem’s Old City and was shot dead by security forces.

The police officer’s protective vest stopped the knife and he was unharmed. The attacker, from east Jerusalem, was shot dead by other officers.

Later in the day, a female attacker stabbed an Israeli policeman near the force’s headquarters in Jerusalem and was shot and wounded by the victim, police said.

In the third attack, two “terrorists” stabbed two Israelis in the east Jerusalem settlement of Pisgat Zeev, with one attacker — reported to be 16 years old — killed and the other shot and seriously wounded.

The victims were both Jews, with a 16-year-old gravely wounded and a 20-year-old seriously wounded, police said.

On Sunday night, four Jews were attacked near a kibbutz in northern Israel by an Arab Israeli who rammed them with his car and then lunged at them with a knife.

The Israeli army said that two soldiers were hit by the car, with one of them seriously injured, and two civilians were stabbed.

The unrest has spread to the Gaza Strip, hit by three wars with Israel since 2008. Clashes along the border left nine Palestinians dead from Israeli fire on Friday and Saturday.

On Sunday, an Israeli air strike in retaliation for two rockets fired at Israel demolished a house in northern Gaza, killing a woman and her two-year-old daughter.

Palestinian frustration has mounted with efforts towards statehood at a standstill and Israel’s occupation continuing, and a recent opinion poll found a majority favour a return to armed uprising in the absence of peace talks.

Funerals of Palestinians killed during riots or while allegedly carrying out attacks — as well as videos of the shootings — have fed anger.

On Monday, children with plastic guns mixed among hundreds of others who carried the body of Ahmed Sharake, a 13-year-old, during his funeral procession at the turbulent Jalazone refugee camp.

He was killed on Sunday during clashes in Ramallah.

“He left without telling me,” his mother Huda told AFP. “I saw on television that someone was killed and it was only afterward that somebody told me that it was Ahmed.”

Around 25 Palestinians have been killed amid the unrest, including alleged attackers.

The Red Crescent said Sunday that 1,021 Palestinians have been wounded by live fire and rubber bullets since October 3.

But while Netanyahu and Abbas have sought to avoid an escalation, frustrated Palestinian youths have defied efforts to restore calm.

On Sunday, the Israeli cabinet approved a four-year minimum prison term for those convicted of throwing stones at moving vehicles.

An Israeli security official, in a cabinet briefing on Sunday, charged that senior members of the Palestinian Authority and Abbas’s Fatah party were inciting violence.

Israel also said Monday that YouTube had taken down Palestinian videos that the Jewish state considered to be “inciting murder”.

Videos of Palestinians stabbing Israelis or calling for such attacks as well as footage of rioters throwing stones at Israeli soldiers have been shared on the Internet.