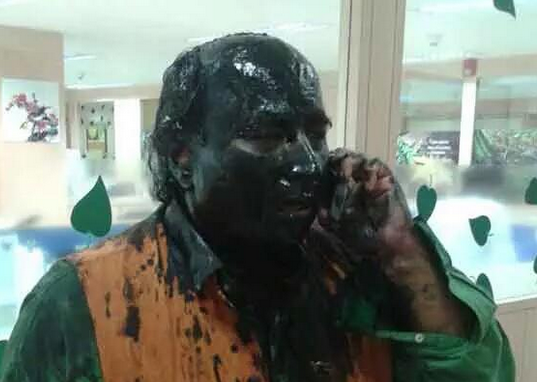 “As soon as I stepped out of my house and got into my car, around 8-10 Shiv Sena workers attacked me and threw ink on my face,” Kulkarni told ANI.

The attack comes in the wake of Kulkarni’s refusal to back down from organising Kasuri’s book launch.

Warning Kulkari before the event Shiv Sena leader, Ashish Chemburkar said, “We will ensure that the function does not take place no matter what the obstacles are before us.”

The party claimed that the only way the programme could be allowed in Mumbai was if Kasuri paid homage to all the martyred Indian soldiers who had died in India-Pakistan conflict.

Kulkarni has served as speechwriter for BJP veterans Atal Bihari Vajpayee and L K Advani, and was a key aide to both BJP leaders.

The Shiv Sena has been vehemently protesting against Kasuri’s book launch, saying it was an insult to the Indian soldiers who had died in the recent ceasefire violations by Pakistan, and had warned that there would be repercussions if the event was not cancelled.

Condemning the attack, MoS Home, Kiren Rijiju said, “Everyone has a right to protest but there should be no physical harm done.”

In a joint press conference with Khurshid Mahmud Kasuri, Sudheendra Kulkarni said that the event will go on as planned. We have been assured full security and assistance by the police.

“I had spoken to Uddhav Thackeray yesterday and I had said that we respect their stand and they should respect ours. If they wanted to oppose, they should have launched a peaceful protest, added Kulkarni.”

Kasuri said that everyone has the right to protest peacefully but no one should take law in their hands.

Justifying the attack, Shiv sena leader Sanjay Raut said that this is just a ‘mild’ protest and we will not tolerate such anti-national events.

Congress leader Digvijaya Singh slammed the Shiv Sena for smearing ink on Kulkarni saying that it was ‘Talibani hooliganism’ and that Uddhav Thackeray must control his ‘goons’.

The senior Congress leader asserted that such ‘intolerance’ in India can’t be tolerated.

Reactions from political arena and activists are pouring thick and fast:

Get Inked….. I think Shiv Sena misunderstood the meaning. #SudheendraKulkarni

Addressing a press conference in Mumbai, Shiv Sena leader Sanjay Raut justified the attack on Kulkarni and rubbished the reports that Sena has called off its protest. “Our protests will continue. Sudheendra Kulkarni is a Pakistani agent and Kasuri has been supporting Hurriyat Conference.”

Despite strong opposition from the Shiv sainiks, ksauri’s book launchhas finally been launched in the Nehru stadium, Mumbai amidst 3 tier security.