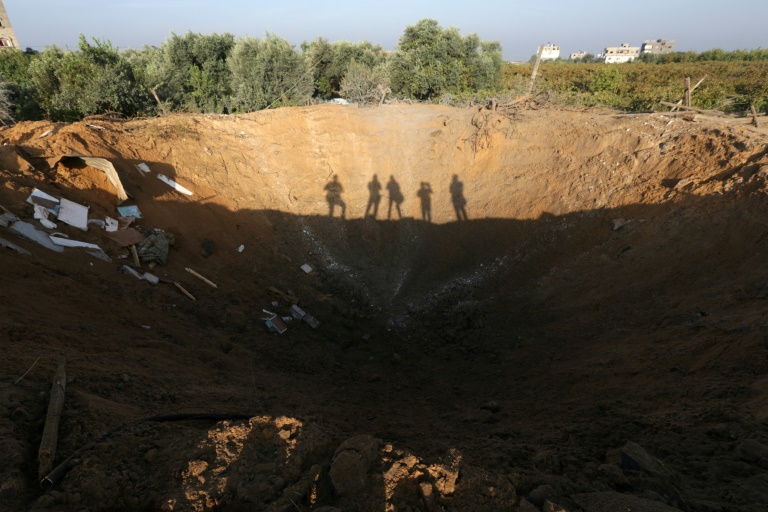 A Palestinian teenager was shot dead in the West Bank and four Israelis were stabbed Sunday as violence mounted following an air strike that killed a pregnant woman and toddler in Gaza.

Israeli forces shot dead the teenager, identified by the Palestinian health ministry as Ahmad Sharake, 13, during clashes near the West Bank city of Ramallah.

Medics said dozens of Palestinians were shot and wounded in other clashes across the West Bank.

Within hours of Sharake’s killing, four Jews were stabbed and wounded in northern Israel, one of them seriously, by an Arab Israeli who rammed them with his car and then lunged at them.

And with unrest threatening to spiral into a full-scale intifada, or uprising, a retaliatory Israeli air strike in Gaza overnight killed a pregnant Palestinian woman and her toddler.

The violence came on top of more than 10 days of clashes between Israeli forces and Palestinians in the occupied West Bank and annexed east Jerusalem, as well as a series of Palestinian stabbings of Jews.

Gaza was only drawn into the violence on Friday, with clashes along the border since leaving nine Palestinians dead from Israeli fire.

Two rockets fired at Israel, one of which hit an open field and the other was intercepted, prompted Israel to carry out an air strike overnight Saturday targeting arms manufacturing facilities of the Islamist movement Hamas.

The Israeli strike demolished a house in the northern Gaza area of Zeitun, killing Nur Hassan, 30, and her two-year-old daughter Rahaf.

Amid fury over the killings, a spokesman for Hamas which controls the coastal enclave said “this shows the occupation’s desire to escalate”.

“We warn the occupation against continuing this foolishness,” said Sami Abu Zuhri.

On Sunday, six Palestinians were wounded in clashes with Israeli forces in central and northern Gaza.

A military spokeswoman told AFP that soldiers opened fire after hundreds of Palestinians hurled rocks and tried to rupture the border fence with burning tyres.

The Hamas chief in Gaza, Ismail Haniya, has already branded the spiralling violence between Israel and the Palestinians an intifada and called for further unrest.

Sunday’s stabbings near Gan Shmuel kibbutz in northern Israel left a 19-year-old woman in serious condition, as well as moderately wounding a girl, 14, and lightly wounding two men aged 20 and 45.

An AFP photographer at the scene said a yellow Fiat used by the assailant, its windshield smashed, was being examined by security forces for possible explosives.

The attack was the 15th stabbing of Israelis since October 3, but the first by an Arab Israeli to cause injury — rather than by Palestinians from east Jerusalem or the West Bank.

In a revenge stabbing, a 17-year-old Jew in the southern Israeli city of Dimona wounded two Palestinians and two Arab Israelis on Friday.

After a policeman told 31-year-old Israa Jaabis to stop, she shouted “Allah Akbar” (God is greatest) and blew up a gas cylinder in her car, security forces said.

Explosives had not previously been used in violence since the start of the month during which the wave of stabbings has sparked fear among Israelis.

While Netanyahu and Palestinian president Mahmud Abbas have sought to avoid an escalation, frustrated Palestinian youths have defied efforts to restore calm.

Rioting has seen Palestinians throwing stones and firebombs at Israeli forces throughout the West Bank, who have responded with live fire, rubber bullets, tear gas and stun grenades.

The army said the clash in which teenager Sharake was killed broke out as hundreds of Palestinians near Ramallah attempted to approach a road to throw stones and firebombs at settlers’ cars.

Near Nablus to the north, 55 Palestinians were wounded by Israeli army live fire, medics said.

Netanyahu has ordered the emergency call-up of 16 reserve border police units to reinforce officers in east Jerusalem and throughout Israel.

On Sunday, the cabinet approved a four-year minimum prison term for people convicted of throwing stones at moving cars.

With international concern mounting over the violence, French President Francois Hollande’s office said: “Everything must be done to… end this cycle which has already caused too many victims”.