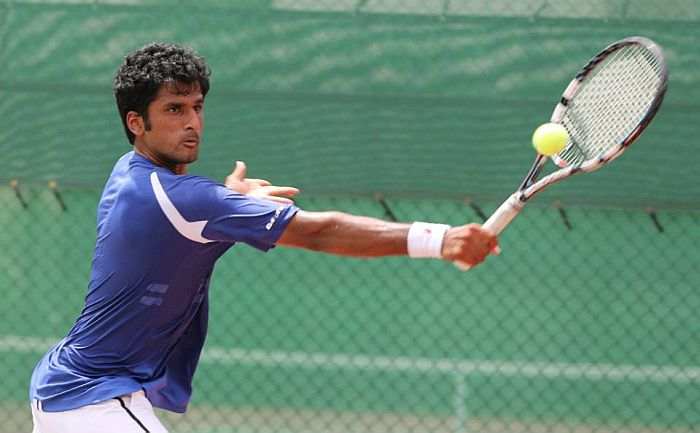 Mumbai: Tennis player Saketh Myneni has climbed to number two in India rankings in singles after reaching a career high ATP ranking of 168.

Saketh has enjoyed a few good weeks on the ATP Challenger tour in both singles and doubles. He jumped 30 spots in the rankings after a run to the finals at the ATP Challenger tournament in Agri, Turkey. Saketh’s most impressive win was against 3rd seed and World No. 115 Evgeny Donskoy of Russia. He also had two good weeks in doubles with fellow Indian Divij Sharan, winning a Challenger title in Izmir and reaching the semi-finals at Agri.

Saketh had a wonderful first edition of CTL wherein he played for Pune Marathas and ended up being in the winner’s side. He shared the court with former Wimbledon Champion Pat Cash, Marcos Baghdatis and Agnieszka Radwanska, and played a vital role in helping Pune Marathas clinching the title in season 1.

Speaking on Saketh’s achievement, Vijay Amritraj, Managing Director Second Serve Pvt. Ltd. and Chairman Champions Tennis League, said, “I was very impressed with his consistent performance last year in CTL and it is a delight to see Saketh Myneni progress so well in 2015. I have fond memories of his exploits during CTL’s inaugural season when he won the Margaret Amritraj Award for the best Indian player. He has become an integral part of the Davis Cup squad as well. Team competition seems to get the best out of Saketh judging by his great performances in college tennis in the US and CTL 2014. It is wonderful to see him translate his great performances to the singles court. His runs in the challenger circuit should build his confidence for bigger battles ahead. I wish him the very best.”

Saketh Myneni said, “It is truly a reward of my hard work to climb up 30 spots in the ATP ranking to reach my career high of 168. It has taken several weeks of tough competition in the Challenger tour. I have been determined to make a solid mark in the tennis world from a very young age and I’m delighted to be India’s No. 2 now and hope to rise further. It has been a rewarding year and I hope to do my best in CTL 2015 and learn more from the elite international players.”

The Champions Tennis League 2015 will commence from November 23rd 2015 and will see 13 matches played over a 2-week period. CTL will feature six city based teams across India. The teams will be structured into two zones, each having three teams, where all teams play each other in a home and away format. The team winning the highest number of games in their respective zone will play each other in the grand finale on December 6th 2015 to win prize money of Rs. 1 crore. The runner-up will win Rs. 50 lakhs.