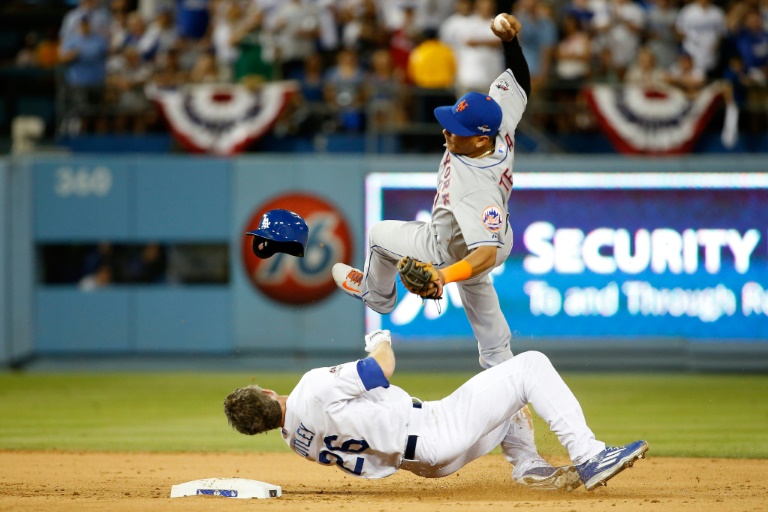 The New York Mets were livid over a controversial slide by Chase Utley that not only sparked a four-run Los Angeles Dodgers rally but broke the right leg of their star shortstop.

Ruben Tejada was carried off the field in Saturday night’s game two of the National League Division Series with a fractured right fibula and will miss the rest of the season.

Major League Baseball’s disciplinary officials said they would review the slide by Dodgers second baseman Utley to see if a suspension or fine is warranted.

Utley was trying to break up a double play in the seventh inning when he barrelled into Tejada, of Panama, at second base in the Dodgers’ 5-2 win.

“It certainly was late. That concerns me. The lateness of the slide. I’m looking at it to see if anything should be done.

“I have to determine if I thought it was excessive. Not that you shouldn’t slide hard, but as I said, just the late slide is probably the only thing that is in question right now.”

Second base umpire Chris Guccione ruled the slide to be legal.

“That’s a judgement call,” Torre said. “I’m still watching replays of it. They get a chance, one shot to look at it. I can’t fault the umpire for everything he had to look at.”

The Mets were livid about losing one of their star players that way.

Said Mets second baseman Kelly Johnson: “We’re losing our starting shortstop now for the rest of the playoffs. He’s got a broken fibula. It cost us potentially this game. And we don’t have anything to show for it.”

Utley defended the slide saying he wasn’t trying to hurt anyone.

“The tying run’s on third base, I’m going hard to try to break up the double play,” Utley said. “I feel terrible that he was injured.”