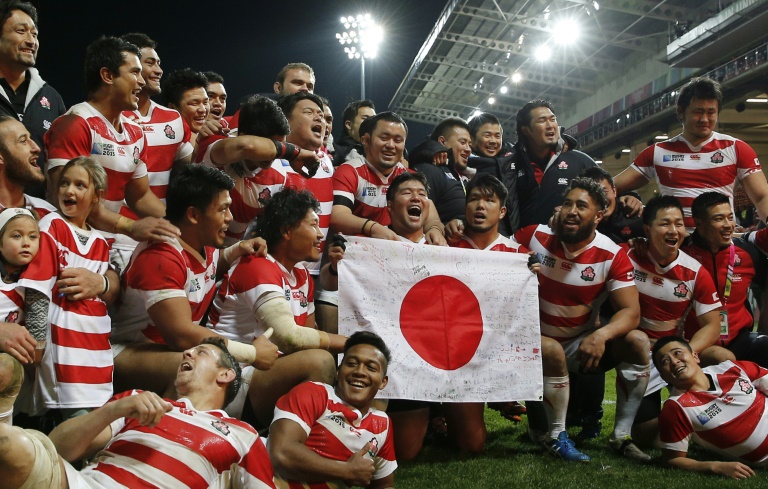 The former Australia boss said his side’s attacking rugby had inspired a new generation to follow the sport in Japan and were now rightly considered heroes as they prepare to host the 2019 World Cup.

Japan ended their stunning England 2015 campaign by beating the United States 28-18 at Gloucester’s Kingsholm ground Sunday. They became the first nation to win three group games but fail to reach the quarter finals.

“Before this tournament, let’s be honest, Japan was one of the joke teams. Teams would put out their B team against them and beat them by 80 or 90 points,” Jones said.

“To come to this tournament and win three out of four games is a super effort from the team. It just shows the quality of the players we have and how hard they’ve worked to achieve this.”

Fullback Ayumu Goromaru, who got another nine points Sunday to take his Test total above 900, has been one of the revelations of the tournament.

“It was interesting coming in the bus here,” Jones said after his final game in charge.

“We were driving in and the fans on the side of the road with Japanese flags — most of the people definitely didn’t look like Japanese. What a wonderful thing for the team to have achieved that.”

The Australian said if Japan were to go into the 2019 tournament with a higher ranking, they would face an easier pool and have a better chance of reaching at least the quarter-finals.

“Maybe there were 30 million people in Japan watching the game,” he said of the United States match.

“Thirty million is the whole of the Australian population, plus the kangaroos, plus many of the sheep. Out of that 30 million there’s got to be parents who want their kids to play rugby. There’s probably kids in front of the mirror now practicing their goal kicking.

“It’s a fantastic opportunity for Japan to have a new generation of rugby players, fans and heroes. These guys are heros now. They’ve changed the whole image of Japanese rugby.”

Brave Blossoms captain Michael Leitch said despite not being able to reach the quarter-finals, the team had decided to play their last World Cup match with pride.

“We can show what we are made of to the world and to the fans in Japan, to show how wonderful this sport is. This is how we motivated ourselves,” the 27-year-old back said.

In their post-match circle on the pitch on Gloucester, the team had their eyes firmly set on reaching the last four on home soil in 2019, Leitch said.

“We have four years to go before we achieve this goal. We didn’t achieve it to go to the semi-finals this time, but there are little goals we achieved,” he said.

“We talked how we can go to 2019 and how we present ourselves back in the country.”

After leaving Japan, Jones now takes over the Cape Town Super Rugby side the Stormers.

Asked about the possibility of managing England, he said he was brought up with good manners.

“If anyone comes knocking on your door, it’s polite to answer,” the 55-year-old said.