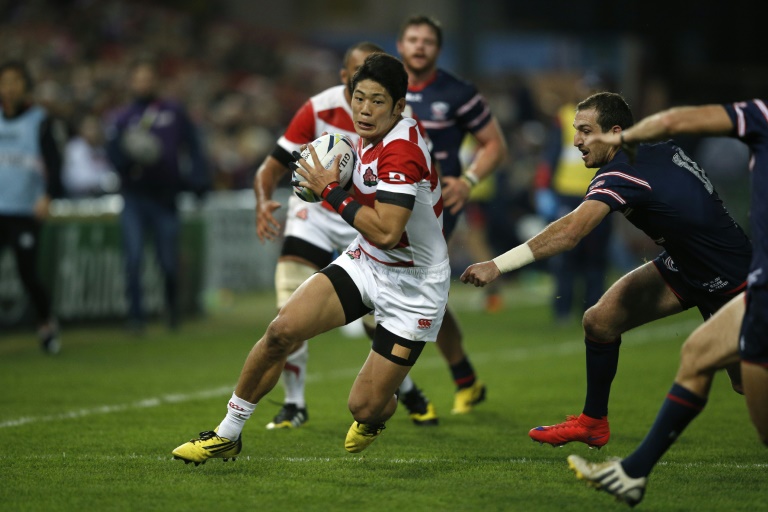 Japan ended their stunning World Cup campaign on Sunday by beating the United States 28-18 to become the first nation to win three group games but fail to reach the quarter finals.

The Brave Blossoms have already caused the biggest sensation in World Cup history by beating South Africa 34-32 in their opening Pool B game.

But the simple victory over the American gave a fitting sendoff to coach Eddie Jones, who now leaves the post having said Japan would be the “team of the tournament” if they got three wins.

The winning points came from Kotaro Matsushima, Yoshikazu Fujita and Amanaki Mafi tries, and the reliable kicking of full back Ayumu Goromaru, who took his Test points haul beyond 700.

The 2019 World Cup is the first time the tournament will be hosted by an emerging rugby nation, meaning the Brave Blossoms were under pressure to show they merit the award.

“The guys have all played above themselves, they have worked hard, they played with a real spirit, they played how rugby should be played,” said Jones.

The Australian said he would definitely be heading for the Stormers in South Africa.

“I have done my job with Japan. When I took over Japan I wanted to bring pride back in the national team and I think we have done that so it is someone else’s turn to take it over.”

After the South Africa upset, Japan lost 45-10 to Group B runners-up Scotland, then beat Samoa 26-5.

Japan supporters among the 14,517-strong crowd wore kimonos, while some US visitors were dressed head to toe in Elvis Presley jumpsuits. One Japan fan had his body painted with a message thanking Jones.

The United States retained only Zack Test and Samu Manoa from the side that lost to South Africa, while full-back Chris Wyles returned to captain the Eagles.

But Japan immediately struck back. A kick through by Kosei Ono allowed Fujita to run on and take the Brave Blossoms to within five metres.

With the Eagles stretched, wing Matsushima crossed the line in the seventh minute and Goromaru converted.

The Eagles then drove deep into Japanese territory and scored a try through wing Takudzwa Ngwenya, who ran through to touch down in the right corner in the 25th minute.

With Japan committing players under the posts, Ngwenya had the space to score his first World Cup try in eight years.

Japan were immediately back on the attack and soon after, Fujita scored his 50th Test try as the Japan pack drove for the line.

Goromaru converted then kicked a 33rd-minute penalty to extend Japan’s lead to 17-8 at half-time.

Goromaru scored another penalty in the 44th minute as Ngwenya was punished for being offside.

After Matsushima went off with a head injury, MacGinty scored a penalty in the 55th minute to keep the United States in touch.

But US loosehead prop Eric Fry was sin-binned and within seconds, substitute Mafi stretched over the line in the 62nd minute. Goromaru missed the conversion.

The Eagles were not deterred, however, and in the 72nd minute MacGinty released the ball for Wyles to score a try, which the provider converted.

Goromaru scored another penalty in the 77th minute to seal the victory and Japan were given a standing ovation at the final whistle.