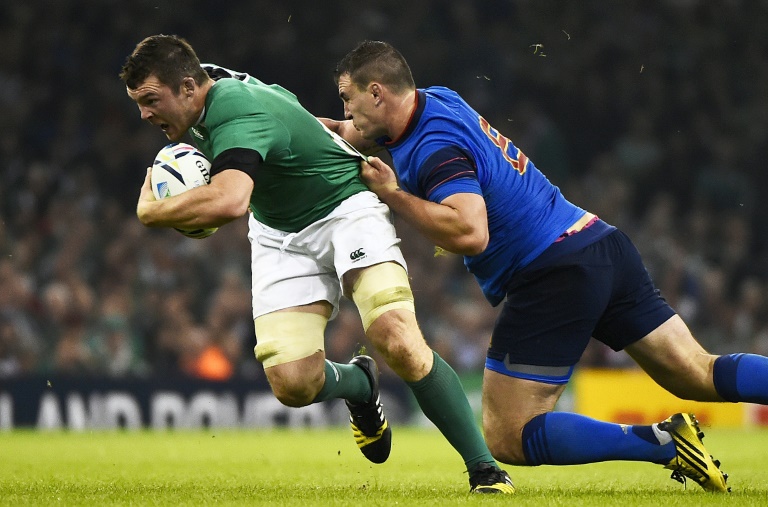 Ireland flanker Peter O’Mahony will play no further part in the World Cup after suffering knee ligament damage in their brutal victory over France.

And doubts over captain Paul O’Connell and star fly-half Jonny Sexton hung over Ireland as they countdown to a quarter final against Argentina on Sunday.

“Peter O’Mahony suffered a knee ligament injury and is returning to Dublin for specialist opinion. He will take no further part in the tournament,” said Ireland team manager Michael Kearney.

“Paul O’Connell appears to have suffered a significant hamstring injury and was hospitalised overnight.

“He’s having scans later today to clarify the extent of the injury.”

O’Mahony has been replaced by Leinster back row forward Rhys Ruddock, who will join the squad in Cardiff later on Monday.

Sexton, who limped off in the 25th minute, sustained a “groin injury”.

Asked whether Sexton would be available for to play against Argentina, Kearney said: “That’s not clear at this stage.

“But the news is a little more encouraging than what we initially thought.

“At the moment, definitively only Peter O’Mahony has been ruled out.”

Full-back Rob Kearney, scorer of one of Ireland’s two tries, said the injury toll had taken the shine off the supremely gritty Irish performance.

“You never like to lose players through injury, also the calibre of some of the players and your captain as well, it does take the gloss off it,” he said.

“When you’re in tournaments like this where the physicality is so big, and you can see other teams suffering from it too, you don’t have huge amounts of time to sit around thinking about it.

“We have another massive Test match in six days’ time, we’ve got to keep looking forward and get on with it, as cruel as it may sound.”

The Irish are also waiting to see whether another star backrow forward, Sean O’Brien, is cited over an incident involving France lock Pascal Pape early in the game.

O’Brien was seen in television images striking Pape in the stomach, poleaxing the French enforcer, who received treatment on the pitch before continuing.

“We’re all aware of the incident, obviously,” Kearney said.

“The citing officer has got a 36-hour timeframe in which to cite. We haven’t heard anything from the match officials at this stage.”

Coach Joe Schmidt argued after Sunday’s match that O’Brien had not landed a “closed fist” punch on Pape.

World Rugby has been keen to clamp down on violent play.

Pape was in February banned for 10 weeks for kneeing Ireland’s Jamie Heaslip in the back — fracturing three vertebrae — in the Six Nations match.