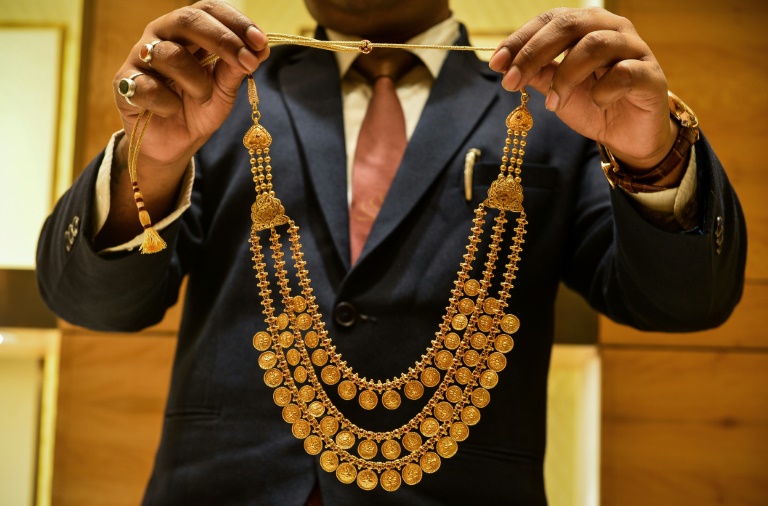 Industry experts say India has around 20,000 tonnes of the precious metal lying idle in Hindu temple vaults, bank safes and jewellery boxes — a trove worth about $700 billion at current prices depending on purity levels.

Caressing delicate bangles she hasn’t taken off since her wedding 11 years ago, Geetanjali Agarwal says she won’t hand over her gold to the government, as it wages a campaign to make the nation’s hoard of the precious metal more productive.

“For a woman to part with her jewellery, that is very difficult,” said the 38-year-old New Delhi housewife, who also buys gold coins at the Indian festival of Diwali as an investment.

“My daughter is 10 years old and I’m already collecting pieces for her.”

Industry experts say India has around 20,000 tonnes of the precious metal lying idle in Hindu temple vaults, bank safes and jewellery boxes — a trove worth about $700 billion at current prices depending on purity levels.

The country vies with China for the title of the world’s biggest consumer of gold — for centuries considered a precious store of wealth — and imported about 900 tonnes last year, its the second biggest import after oil.

Now the government is encouraging people to lend their gold to banks through the Gold Monetisation Scheme starting in November, hoping to bring the national stash into the economy.

Households or temple trusts deposit their gold with banks and earn tax-free interest, so the idea goes, and banks then lend it to jewellers and a valuable asset is brought into circulation.

“A lot of people, particularly women and those in remote rural areas, hold jewellery which is lying idle in India, which is not taken as an investment,” Gopal Krishna Agarwal, economic affairs spokesman for the ruling Bharatiya Janata Party, told AFP.

“(This scheme) can earn some return for those persons.”

But many, such as Poonam Vohra, a housewife from the capital’s middle-class suburb of Rajouri Garden, say they are unsure about handing over their treasures.

“Gold is a really expensive buy and as it is we don’t have much, so whatever we have we’d rather keep,” said the 52-year-old, who keeps most of her jewellery in a bank vault after being robbed of a gold chain while walking in Delhi.

With little state social security to fall back on, gold is a vital safety net in India, in particular for women, for whom it may be the only savings they have.

It is especially important in rural areas where many people do not have access to the formal banking system.

“Whenever there’s a wedding or some function I take it out,” Vohra said.

“Maybe it will be my child’s wedding in six months. I don’t want to give it away.”

A similar scheme in 1999 was a near-total failure, thanks to low interest rates.

The government promises the new scheme is different, with the minimum deposit lowered from 500 grams to just 30 grams — roughly the same as three gold bangles.

Banks will be allowed to set their own interest rates, expected to be between two and four percent, and post offices will boost the scheme’s reach in rural areas.

One fear is that households may face uncomfortable questions about where their gold came from, amid an intensifying crackdown on “black money”.

“People are still bothered about the tax queries. There is a myth that all Indians hold gold as unaccounted wealth,” said Somasundaram P.R., managing director of the World Gold Council India.

Another sticking point is that gold has to be melted down to test its purity — though depositors can watch from a gallery — with the risk it could turn out to be worth less than thought.

For jewellers in Delhi’s Karol Bagh, where the streets are lined with shops selling diamonds and antiques, monetising India’s gold stash would be good news, reducing the need for expensive imports.

“It will be good if our gold gets rotated, if the gold that is lying in bulk with people is put to use,” said Anoop Dhar, manager of the opulent Sunar jewellery store.

“Nothing can be better. We wouldn’t have to bring in gold from outside.”

But at the bustling old market of Zaveri Bazaar in Mumbai — the centre of India’s jewellery trade — some are sceptical the scheme will succeed, noting that it is still easy for people to take out loans against their gold or sell it if they need cash.

“Indians have a family jeweller like a family doctor, and so have access to gold saving schemes run by their trusted jewellers,” said Prithviraj Kothari, head of Riddhi Siddhi Bullions in Mumbai, India’s largest gold trading firm.

“Why would they allow the government to peek into their gold?”