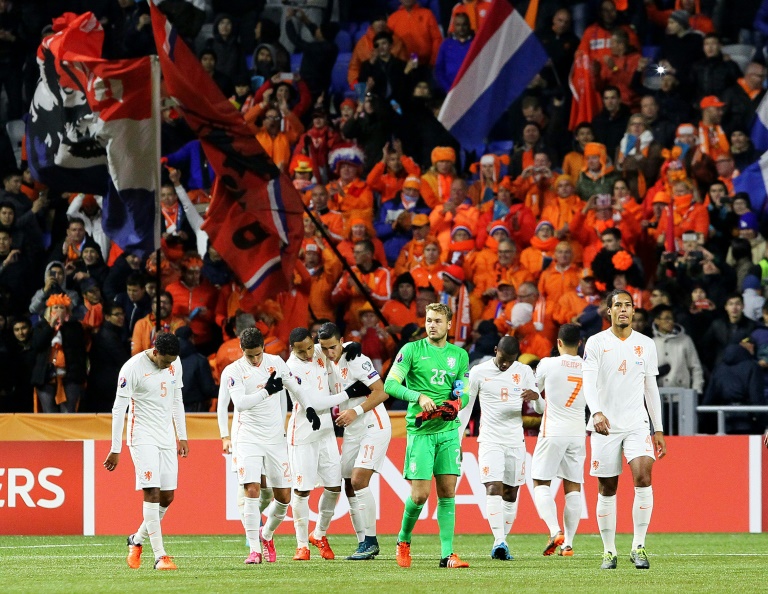 The Netherlands, who were within a penalty shootout victory of reaching the 2014 World Cup final, now stand on the brink of missing the European Championships for the first time since 1984.

Winners of their only major tournament in 1988, when Marco van Basten and Ruud Gullit inspired them to continental victory over Russia in Germany, their fall from grace has been one of football’s greatest mysteries as they now stare Euro 2016 elimination squarely in the face.

Euro semi-finalists in 2000 and 2004, quarter-finalists in 2008, they were only beaten by an Andres Iniesta extra-time goal in the 2010 World Cup final by Spain, before their run to the last four in Brazil, last summer, where Argentina defied them after a 0-0 draw after 120 minutes in Sao Paulo.

Guus Hiddink was the man entrusted to guide them through qualifying for the 24-team tournament that will feature in France for the first time in a format that seemed to appear a formality for Europe’s regular contenders.

However two defeats in their three opening matches against the Czech Republic and Iceland made their task difficult and their record of four wins, four defeats and a draw leaves the Dutch two points behind Turkey with one game to play.

The Turks host Iceland and are in control of their own destiny, to book a playoff spot, while the Netherlands must beat the Czechs in Amsterdam to keep their slender hopes alive.

“The whole qualifying tournament has all been very difficult. We now no longer have it in our own hands. I feel terrible, really terrible,” star striker Robin van Persie said after the 3-0 September defeat in Turkey.

Danny Blind has since replaced the departed Hiddink but the Czech Republic are guaranteed their place in France, alongside Iceland, while Turkey hold a stranglehold on the playoff bound third spot.

Only a Dutch win and a Turkish defeat, at home to Iceland can rescue a desperate situation.

The team still boasts several household names such as van Persie, Wesley Sneijder, injury-prone Arjen Robben and Klaas-Jan Huntelaar but the biological clock has been ticking against an ageing team that may be past its sell-by-date.

The defence has also been called into question with inexperienced players such as Bruno Martins Indi, Stefan De Vrij, Jeremy Bruno, all 23, and 19-year-old Jairo Riedwald, in a reargaurd described by former Dutch great Johann Cryuff as “astonishingly” lacking in quality.

Under current Manchester United manager Louis van Gaal, the team leaned on a strong defensive foundation and struck on the counter-attack with devastating effect that almost carried them to a first-ever World Cup.

Hiddink went back to the more traditional 4-3-3 but it was a disaster that cost the well-travelled 68-year-old his job.

At club level, the status of former European champions Ajax and finalists PSV Eindhoven has crumbled and a Champions League quarter-final place is rare at best.

Elimination on Tuesday will force reconstruction but it now appears a certainty that the Netherlands will fail to qualify for a major tournament for the first time since the 2002 World Cup and first European Championships since 1984.