Home Sports Walcott warns England not to rest on their laurels 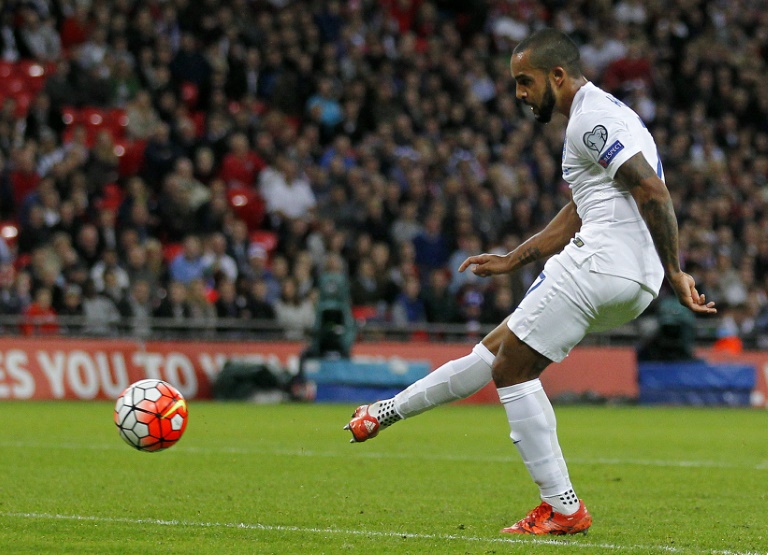 Theo Walcott has warned his England team-mates that completing an historic 100 percent record in the Euro 2016 qualifying campaign will count for nothing unless they mount a strong challenge at the finals.

Roy Hodgson’s side can become only the sixth team to win all of their matches in a European Championship qualifying campaign if they defeat Lithuania in their 10th and final Group E fixture at the LFF Stadium on Monday.

It would be the first time England have gone through qualification, in its current format, without dropping a point.

But Arsenal forward Walcott, who kept England on course for their memorable milestone with the opening goal in Friday’s 2-0 win against Estonia, is honest enough to admit Hodgson’s men faced relatively weak opposition in the group and much sterner tests lie in wait in the finals in France.

“We want to make it 10 on Monday night. It is a nice little thing to have. We want to win every game,” Walcott said.

“But we will be more tested in these friendlies coming up (against France and Spain next month) and everyone wants to win competitions and make this country proud.

“There are some young, eager faces in that dressing room who are keen to do well but we are only going to be judged when it comes to tournament football.”

Although Walcott was understandably keen to strike a cautionary note given England’s habit of underachieving at major tournaments, he also insisted Hodgson and the players deserve credit for recovering from the shattering blow of crashing out of the World Cup at the group stages.

Since their misery in Brazil, England have embarked on a 13-match unbeaten streak and, while some of their wins have been achieved with less than impressive displays, Walcott wants the much maligned national team to be shown a little respect.

“Having nine wins after the disappointment from the World Cup and bouncing back the way the players have done, we have to be proud of ourselves,” Walcott said.

“The backroom staff have changed things and things are working for us. This team is definitely hungry and eager to do well.”

The always conservative Hodgson agrees with Walcott that judgement has to be reserved on England until the finals.

“I think we’ve got probably the best defensive record in qualifiers. We’ve certainly scored the most goals,” Hodgson said,

“We don’t stand up and shout it from the rooftops every time, but it’s not a bad achievement. Basically we keep our feet on the ground.

“We know it’s next summer that really counts, but we’re working hard to improve going forward into that competition.”

With top seeding and qualification as group winners confirmed, Hodgson has decided he can do without Wayne Rooney, Michael Carrick, Joe Hart, Gary Cahill and James Milner, who have all been sent back to their clubs to recuperate.

An inexperienced party of 20, the average number of caps per player in the squad is 12, will travel to Lithuania.

Three years after winning his first cap, Stoke’s Jack Butland will start in goal and defenders Phil Jones, Chris Smalling and Phil Jagielka, plus midfielder Jonjo Shelvey, are also in line to start.

“We think he’s a good goalkeeper. We always believed in him and he’s certainly deserved his chance,” Hodgson said of Butland.

“Although Joe would have liked to have got an extra cap under his belt, he fully understands that this is Jack’s moment. We wish him well.”

Lithuania, beaten 4-0 by England earlier in the campaign, are second bottom after a 1-1 draw in Slovenia.

They could still finish level on points with Slovenia, who hold the play-off spot at present, but an inferior goal difference and head to head record means they have no chance of qualifying.