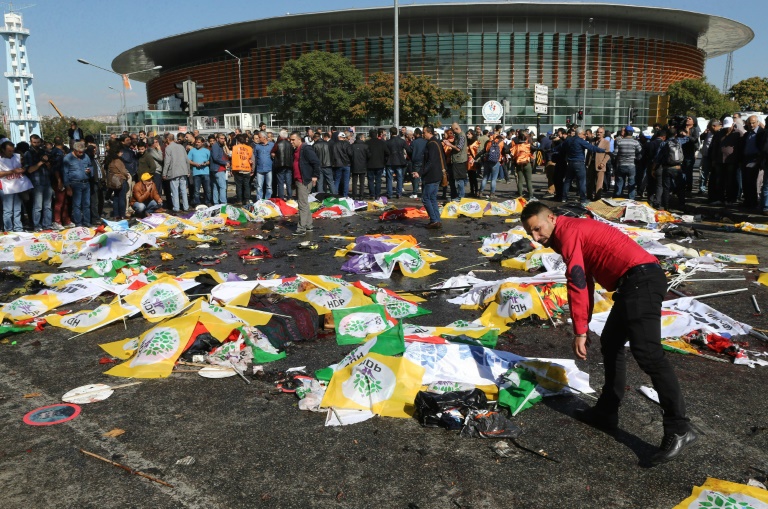 At least 95 people were killed in Ankara Saturday when bombs set off by two suspected suicide attackers ripped through a crowd of leftist and pro-Kurdish activists at a peace rally, in the deadliest such attack in Turkey’s recent history.

The twin blasts, near Ankara’s main train station, ratcheted up tensions ahead of Turkey’s November 1 snap elections which were already soaring amid the government’s offensive on Kurdish militants.

Bodies of slain demonstrators were seen strewn across the ground after the explosions, with the banners they had been holding for the “Work, Peace and Democracy” march lying next to them.

The attack also left 246 wounded, 48 of whom are in intensive care, according to an updated toll announced by Prime Minister Ahmet Davutoglu’s office.

President Recep Tayyip Erdogan denounced what he called a “heinous attack” targeting “our unity and our country’s peace”.

Declaring three days of mourning, Davutoglu said there were “strong signs” the attack was carried out by two suicide bombers.

International condemnation of the bloodshed was swift. German Chancellor Angela Merkel expressed “sadness and dismay” over the attacks, while US President Barack Obama and Russia’s Vladimir Putin offered their condolences to Erdogan.

There were scenes of chaos after the blasts, as ambulances raced to get to the wounded and police cordoned off the blood-stained area around the train station.

Turkish police fired into the air to disperse demonstrators angered by the deaths of their fellow activists at the anti-government peace rally, an AFP correspondent at the scene reported.

Davutoglu said no one had claimed responsibility for the bombings but that groups including Islamic State (IS) jihadists, the Kurdistan Workers’ Party (PKK) and the far-left Revolutionary People’s Liberation Partyâ€“Front (DHKP-C) were capable of carrying out such an attack.

Amateur footage filmed moments before the blasts and broadcast on NTV television showed smiling activists holding hands and dancing before suddenly falling to the ground as a huge explosion went off behind them.

Reports said hundreds of people in Ankara rushed to hospitals to donate blood for the victims.

The death toll surpassed that of the May 2013 twin bombings in Reyhanli on the Syrian border that killed over 50 people.

UN Secretary General Ban Ki-moon said in a statement he “expects the perpetrators of these terrorist acts to be swiftly brought to justice”.

The White House meanwhile said Obama “conveyed his deepest personal sympathies for those killed and injured” and “affirmed that the American people stand in solidarity with the people of Turkey in the fight against terrorism”.

Turkey’s pro-Kurdish Peoples’ Democratic Party (HDP) had been one of the groups that called for the peace rally.

“A barbaric attack has been committed,” said HDP leader Selahattin Demirtas, blaming a “murderous state” for the deaths.

Among those killed was HDP member Kubra Meltem Mollaoglu, who was standing for parliament in the upcoming polls.

In Istanbul, some 10,000 people marched down the main central avenue to denounce the attacks.

Thousands also took to the streets in solidarity in Paris, Strasbourg and Marseille in France, as well as in Zurich in Switzerland.

Turkey has experienced an upsurge in unrest in recent months, which began after over 30 people were killed in the predominantly Kurdish town of Suruc on July 20 in an attack against pro-HDP activists that was blamed on IS.

The outlawed PKK accused Ankara of collaborating with the jihadists and resumed attacks on the security forces after observing a two-year ceasefire.

Over 140 members of the security forces have since been killed while Ankara claims to have killed more than 1,700 Kurdish militants in weeks of bombardments of PKK targets in southeast Turkey and northern Iraq.

The PKK, which took up arms in 1984 demanding an independent state for Kurds, on Saturday announced it would suspend all offensive operations against Turkish forces ahead of the polls.

“Heeding calls from Turkey and abroad, our movement has decided on a state of inactivity by our guerrillas, unless our people and our guerrilla forces are attacked,” the Kurdistan Communities Union (KCK), an umbrella movement that includes the PKK, said in a statement.

The HDP performed strongly in the last election in June, winning 80 seats in parliament to deprive Erdogan’s ruling Justice and Development Party (AKP) of an outright majority for the first time since it came to power in 2002.

The AKP then failed to form a coalition in months of talks, prompting Erdogan — who had been hoping for a large majority to push through reforms to boost his powers — to call fresh polls on November 1.

It was not immediately clear if the problem was related to the attack, but the Turkish government has moved before to block or limit social media sites — including Twitter — at sensitive times, prompting accusations of censorship.