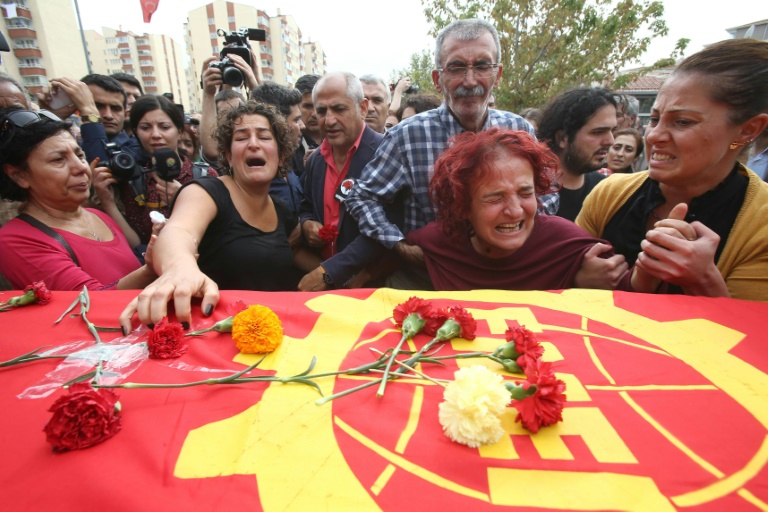 Thousands of people took to the streets of Ankara on Sunday to denounce the government of President Recep Tayyip Erdogan after 95 people were killed in twin suspected suicide bombings on a peace rally, Turkey’s worst ever terror attack.

Prime Minister Ahmet Davutoglu declared three days of national mourning, with flags flying at half mast across the country, as questions grew over who could have ordered the Ankara bombings.

Turkey’s pro-Kurdish Peoples’ Democratic Party (HDP), one of the groups that called the peace rally, issued a statement claiming the actual toll was far higher at 128, giving the names of 120 victims.

Saturday’s attacks intensified tensions in Turkey ahead of snap elections on November 1 as the military wages an offensive against Islamic State (IS) jihadists and Kurdish militants.

Thousands of demonstrators filled Sihhiye Square in central Ankara, close to the site of the blasts by Ankara’s main train station, with some shouting anti-government slogans.

Several demonstrators blamed Erdogan over the bombings, shouting “Erdogan murderer”, “government resign!” and “the state will give account”.

“I am a mother, I’m worried about my grandchildren, I am marching for our children, for our future. Each time, there are people dead, I also die a little,” said demonstrator Zahide, who like many others carried a pink carnation flower to commemorate the victims.

Erdogan condemned the “heinous” attack in a statement and cancelled a visit to Turkmenistan, but has yet to speak in public after the bombings.

The premier’s office said 95 people were killed when the bombs exploded just after 10:00 am (0700 GMT) as leftist and pro-Kurdish activists gathered for the rally outside Ankara’s train station.

It said that 508 people were wounded, with 160 still in hospital and 65 in intensive care in 19 hospitals.

An AFP correspondent said the scene of the blast was littered with ball bearings, indicating the explosions were intended to cause the maximum damage.

In an emotional address at the Ankara rally, the HDP’s leader Selahattin Demirtas said that rather than seeking revenge people should aim to end Erdogan’s rule, starting with the November 1 legislative elections.

“We are not going to act out of revenge and hatred. But we are going to ask for (people to be held to) account,” he added, saying the elections would be part of a process to “topple the dictator.”

Even before the attacks, the president was under immense political pressure after his Justice and Development Party (AKP) lost its overall majority in June 7 polls for the first time since it came to power in 2002.

Coalition talks failed and Erdogan has called new elections on November 1. But to the disappointment of the AKP, opinion polls show the outcome may be little different to the previous ballot.

This weekend’s death toll surpassed that of May 2013 twin bombings in Reyhanli on the Syrian border that killed over 50 people, making the attack the deadliest in the history of the Turkish Republic.

With international concern growing over instability in the key NATO member, US President Barack Obama offered his condolences to Erdogan and solidarity “in the fight against terrorism”, the White House said.

The attacks drove a knife through the heart of normally placid Ankara, which became the capital following the founding of the modern Turkish Republic by Mustafa Kemal Ataturk.

“This could well be Turkey’s 9/11,” said Soner Cagaptay, director of the Turkish Research Programme at The Washington Institute, referring to the September 11, 2001 terror attacks by Al-Qaeda in the United States.

Davutoglu said groups including Islamic State (IS) jihadists, the Kurdistan Workers’ Party (PKK) and the far-left Revolutionary People’s Liberation Partyâ€“Front (DHKP-C) were capable of carrying out such an attack.

NTV television said initial investigations were focusing on a possible connection to IS but this has not been confirmed by Turkish officials.

The attack came just under three months after a suicide bombing blamed on IS, also against peace activists, in the border town of Suruc on the Syrian border killed 33 people.

NTV said that the Suruc and Ankara attacks were similar both in style and the type of bombs used. The same forensic experts sent to Suruc are now working in Ankara.

The Hurriyet and Haberturk dailies reported that the elder brother of Abdurrahman Alagoz, who carried out the Suruc suicide bombing, could have been implicated in the Ankara blasts.

The Suruc bombing caused one of the most serious flare-ups in Turkey in recent times as the PKK accused the government of collaborating with IS and resumed attacks on the security forces after an over two-year truce.

The military hit back against the Kurdish militants, launching a “war on terror” and bombing targets in southeast Turkey and northern Iraq.

With striking timing, the PKK Saturday announced it would suspend all attacks — except in self defence — ahead of the polls.

Two Turkish soldiers were also killed in clashes with the PKK in the eastern Erzurum region, reports said.