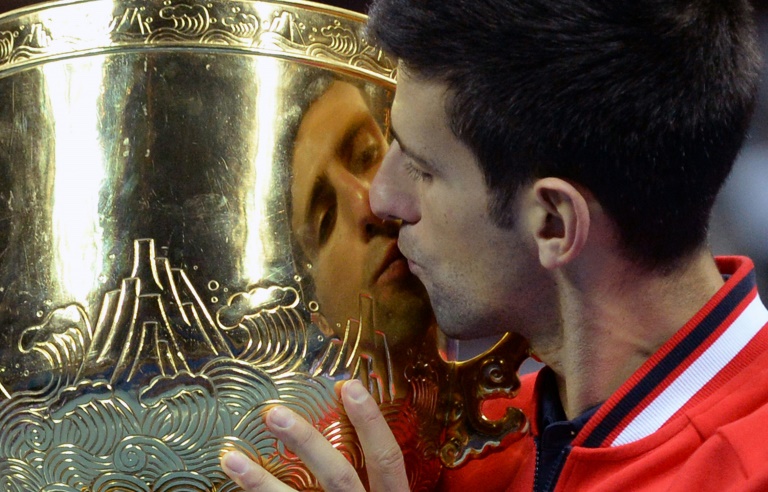 Djokovic won three of the four Grand Slam finals this year and he shows no signs of slowing down at the end of the season, after losing only 18 games in his romp to the Chinese title.

But he said the victory wasn’t as easy as the score suggested against a player he has now faced 45 times — the longest rivalry in men’s tennis history.

“The scoreline, especially in the first set, doesn’t indicate the real battle that we had on the court,” Djokovic said.

“I’m aware of the fact that very few points can decide a winner of the matches I play against the biggest rivals, and Rafa is definitely one of them.

“He’s the kind of player that is a champion and understands the kind of challenge that a big match presents, and he knows how to play on the big stage for the titles. He has won so many.”

Nadal was troubled by a foot injury in the second set but he said he was happy with his performance this week as he fights to return to the very top levels of tennis.

“Every match is important for me. All improvements are important, even if they are the small ones. I felt during this week I improved a lot of things. I take a lot of positive things from the week. That’s very important for me.

“As I said before: my main goal is try to be 100 percent ready for the beginning of next season. A week like this one helps a lot.”

Djokovic put Nadal under pressure from the start with a thunderous opening rally, which the Spaniard lost, and the world number eight then shanked a forehand high into the air to give up the first break point.

Nadal had break points in the sixth game but Djokovic held firm, and the Serb gained his second break in the seventh game when his Spanish opponent volleyed into the net with the court at his mercy.

Nadal called the trainer early in the second set for treatment to his right foot, and when Djokovic broke to go 2-1 ahead the 14-time Grand Slam winner’s challenge looked shot.

An instinctive lob over the stranded Nadal put Djokovic on his way to a second break and 4-1 lead, and after passing up two match points at 5-2, he finally sealed it with an ace for his rapturous Chinese fans.

In their record rivalry, Djokovic moves to 22 won, 23 lost — but with seven victories from their last eight meetings, including this year’s French Open quarter-finals.

With his 29th victory at the China Open, 10-time Slam champion Djokovic is also closing on Nadal’s record for winning starts to a tournament after he racked up 31 before his first defeat at the French Open.