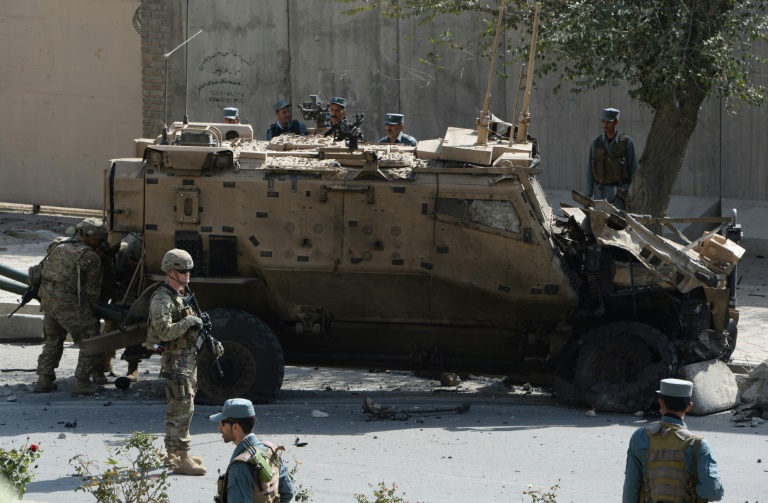 The rush-hour bombing, which sent a plume of smoke into the sky, wounded at least three civilians including a child, as the Taliban ramp up attacks on government and foreign targets.

The intensity of the blast sent an armoured vehicle crashing into a sidewalk, its front end badly mangled, and left the area littered with charred pieces of twisted metal.

“The incident took place while a suicide car bomber detonated an explosive-packed car in the Joy Shir area… of Kabul city,” the interior ministry said.

“The target of the attacker were the foreign forces convoy.”

Security forces cordoned off the area as ambulances with wailing sirens rushed to the scene, but the ministry said the human toll of the blast was limited.

“The ministry of interior condemns in the strongest terms the suicide attack which resulted in the wounding of three civilians,” it said.

The Kabul police said the wounded included a woman and a child.

The British defence ministry confirmed that their military convoy came under attack in Kabul but said the explosion was caused by an improvised explosive device.

“There were no (British) casualties,” it said in a statement.

The emboldened insurgents have stepped up attacks around Afghanistan since they launched their annual summer offensive in late April.

The Taliban captured the northern city of Kunduz on September 28, their most spectacular victory since being toppled from power in a 2001 US-led invasion.

The seizure of the provincial capital for three days was a stinging blow to Western-trained Afghan forces, who have largely been fighting on their own since the end of NATO’s combat mission in December.

The Taliban said Sunday’s bombing was carried out to avenge the recent “barbaric bombardment in Kunduz that martyred our civilians and doctors”.

NATO forces are under fire after a US air strike on October 3 pummelled a hospital in Kunduz run by Doctors Without Borders (MSF), killing at least 12 staff and 10 patients.

The medical charity shut down the trauma centre, branding the incident a “war crime” and demanding an international investigation into the incident, which sparked an avalanche of global condemnation.

The Pentagon announced Saturday it would make compensation payments for those killed or injured in the strike, while suggesting that US forces in Afghanistan could also pay for repairs to the hospital.

But MSF Sunday said it had officially not received any compensation offer, adding that it would not accept funds for repairs in line with its policy of rejecting support from governments.

“The offer of compensation at this stage cannot preempt the result of present and future investigations, nor preclude any further claims or rights of those affected by the US airstrike,” the charity said.

President Barack Obama has apologised over the strike, with three different investigations — led by NATO, US forces and Afghan officials — currently under way.

The Afghan government claims to have wrested back control of Kunduz city but sporadic firefights continue with pockets of insurgents as soldiers, backed by NATO special forces, conduct door-to-door clearance operations.

As fighting spreads in neighbouring Badakhshan, Takhar and Baghlan provinces, concerns are mounting that the seizure of Kunduz was merely the opening gambit in a new, bolder strategy to tighten the insurgency’s grip across northern Afghanistan.