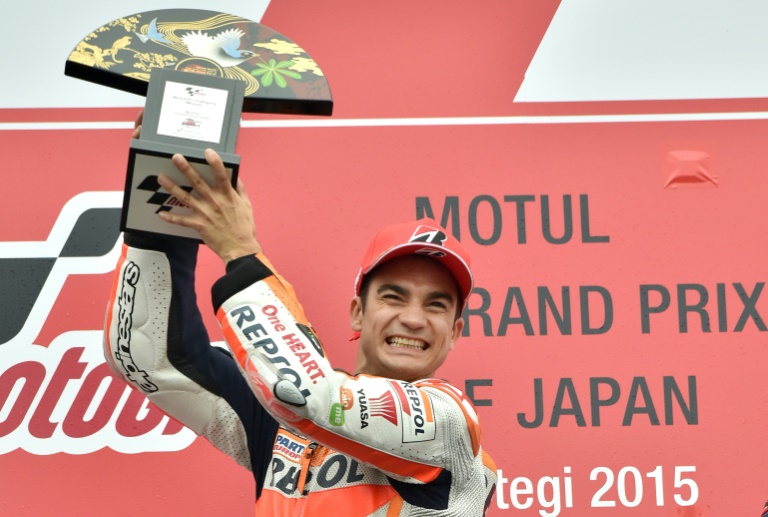 Dani Pedrosa came from behind to grab his first win of the season in stunning fashion at the Japan Grand Prix Sunday, while championship leader Valentino Rossi finished second.

The Spanish Honda rider clocked 46min 50.767sec for his 50th career victory on a drying track after rain, 8.573sec ahead of Rossi on Yamaha and 12.127sec in front of Rossi’s team-mate Jorge Lorenzo.

The results meant the Italian stretched his championship points lead over his closest rival Lorenzo to 18, with three more races to go, followed by distant third Marc Marquez.

Lorenzo, fastest rider in all four practice sessions in dry conditions, controlled the first half of the race as drizzle fell and appeared destined for another victory.

But Lorenzo quickly overtook the Italian on the following straight and began building up a long lead — until Pedrosa started to speed up halfway through the race.

Heavy rain showers and dense fog in the morning had caused a two-hour delay of warm up sessions before the race.

But midway through the MotoGP race, the rain stopped and a dry line began to appear where riders travelled, starting to damage wet tyres for Lorenzo and Rossi who pushed hard from the start, expecting the full wet condition to last.

Pedrosa started from the sixth on the grid and stayed fourth in early laps, but demonstrated an electrifying charge from lap 15 of the 24-lap race when he caught and past Rossi.

Rossi attempted to keep up with Pedrosa, and quickly caught Lorenzo.

In lap 19, stressed Lorenzo rode wide in a corner and decelerated, letting the Italian to pass through and leave him far behind.

Pedrosa said he focused on keeping his lap time consistent, while the track condition began to change.

“At the beginning, I was slow. But my lap time was not too bad,” said Pedrosa, who was more than four seconds behind Lorenzo when he started lap 15.

“On braking points, it was becoming dry. So I tried not to stress. It was hard to think I would be able to pass Jorge,” he said.

“Suddenly, one lap after another, we were becoming closer and I was keeping my lap time.

“I tried to stay calm and do my thing. Toward the end, when I was in front, it was a good scene because … long time no win,” he said.

Rossi said he was content with the results that slightly widened his championship points lead against Lorenzo, but said the Motegi race wore him out.

“It was difficult to control the bike. The tyre began to give up a lot and it became more difficult,” Rossi said.

“I am disappointed. The weather didn’t help us,” he said.

Rossi and Lorenzo looked to the next three races that will decide their fate: Phillip Island in the coming weekend, Sepang in Malaysia in the following weekend and the season finale on November 8 in Valencia.

Mathematically, Rossi, the seven-time world champion in motorcycling’s top division, can claim his first title since 2009 if he finishes second in the next three races, even if Lorenzo collects three more wins.

But the Italian veteran said he must focus to win the next race and fight more victories to stay competitive.

“Two Ducatis, two Hondas are very strong. Now, Dani (Pedrosa) is in a great shape. The last races are very competitive,” he said.

“I love Phillip Island. It’s always difficult to find the setting, and conditions can be tricky. Winds and it can be cold like today,” he said. “It’s a great track. We will do our maximum.”

“We are able to fight for the three wins in the Grand Prix. We continue to believe we still can win the championship. I want to believe it until the end,” Lorenzo said.

“Maybe in the next race, some luck can change for us.”