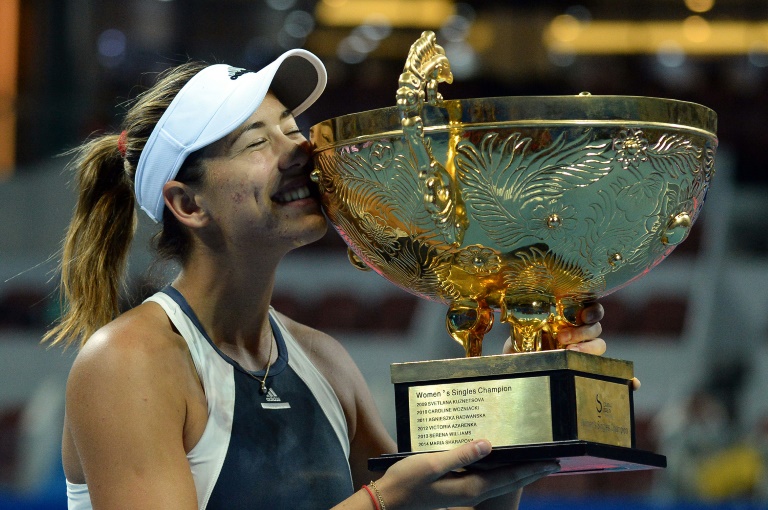 Spain’s Garbine Muguruza underlined her rise in world tennis on Sunday as she beat Timea Bacsinszky in straight sets to win her second career title at the China Open in Beijing.

This year’s Wimbledon finalist overcame a slow start by both players to clinch it 7-5, 6-4 in 95 minutes and soar to a projected fourth in the world rankings — just one point behind Maria Sharapova.

The victory is all the more unexpected as fifth seed Muguruza, 22, retired from the Wuhan Open final against Venus Williams just a week ago, citing exhaustion.

It caps an exhilarating tournament for the Spaniard, who celebrated her birthday with a cake on court and also sealed her spot at the year-ending WTA Finals during her run to the trophy match.

Muguruza recovered strongly from a losing position in an error-strewn first set as both players made heavy weather of winning their service games at Beijing’s National Tennis Stadium.

Muguruza was rocking at 2-5 down but after holding serve with a rasping backhand down the line, she broke Bacsinszky twice in a row and gobbled up her first set point when her opponent flashed a forehand wide.

The second set was a much tighter affair but Muguruza grabbed the crucial break for 5-4 and she went to match point when Bacsinszky went just long with a hopeful lob.

And Bacsinszky, the Swiss world number 17, crumbled, hitting a backhand into the net as Muguruza clasped her hands to the face and fell to the ground in celebration.

The China Open is the second career title for Muguruza, who also won in Hobart last year.