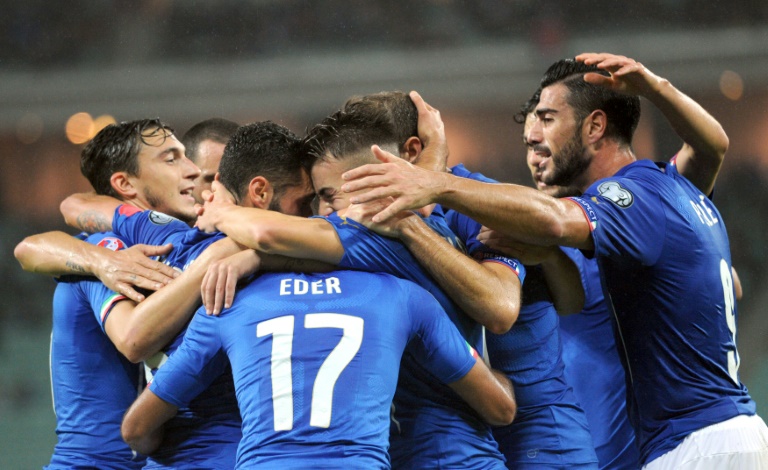 Italy qualified for the Euro 2016 finals on Saturday with a 3-1 win over Azerbaijan, while in the same group Norway’s 2-0 win over Malta leaves them on the brink.

Italy’s hard-fought win in Group H was assured with goals from Eder, Stephan El Shaarawy and Matteo Darmian, but Antonio Conte’s side had a nervy time in Baku.

After Marco Verratti’s defence splitting pass put Eder in for the first, Azerbaijan took full advantage of a terrible defensive slip up from Giorgio Chiellini and Leonardo Bonucci.

Dmitri Nazarov pounced on a loose ball to beat a seething Gigi Buffon from the edge of the area.

But El Shaarawy settled their nerves just before half time after the Italians beat an offside trap, and Darmian’s clincher allowed the Italians to then sit on their lead.

Norway are second in the group and if third placed Croatia fail to win in their match at home to Bulgaria on Saturday night, the Scandinavians would qualify too, ahead of a tricky last game in Italy next Tuesday.

Norway coach Per-Mathias Hogmo watched his charges win a third straight qualifier as Alexander Tettey got a 19th minute opener by bundling home a loose ball after his initial effort was blocked by the ‘keeper Andrew Hogg.

In Group A, 2014 World Cup semi-finalists the Netherlands kept their hopes of a third placed finish alive with a 2-1 win in Kazakhstan.

Iceland and the Czech Republic are already through from Group A, leaving Turkey and Netherlands to fight for a third-place play-off berth.

Dutch handler Danny Blind took his charges to Group A bottom side Kazakhstan on a wing and a prayer, knowing four points from two games for Turkey would leave the Netherlands eliminated.

But their hopes are still alive as Georginio Wijnaldum put the Dutch ahead in the 33rd minute, while Wesley Sneijder added a second on 50 minutes to keep them on track despite Islambek Kuat grabbing a consolation goal deep into added time.

Former Arsenal and Manchester United striker Robin Van Persie came on as a late substitute to earn his 100th cap for the Netherlands.

The Dutch are now hoping already qualified Czech Republic can beat Turkey, ahead of Tuesday’s crunch clashes when the Netherlands take on the Czech Republic and Turkey play Iceland.

Also in Group A, Iceland, already qualified for their first ever major finals, drew 2-2 with Latvia.

Later Saturday Real Madrid star Gareth Bale is hoping to help end Wales’s 57-year wait to qualify for a major tournament by sealing a point in their Group B tie against Bosnia-Herzegovina.

Wales, who have never appeared at the European Championships, will be able to start planning their trip to France for next year’s finals if they beat or draw with Bosnia and they could even make it with a defeat, if third placed Israel lose or draw against Cyprus.

Belgium can also qualify from Group B should they grab a win at Andorra.