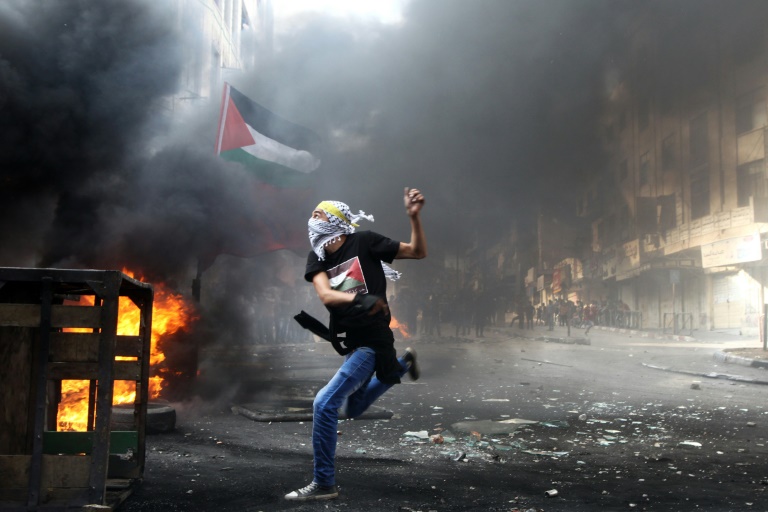 A pregnant Palestinian mother and her toddler daughter were killed in an Israeli retaliatory air strike on Gaza Sunday, as violence between Israelis and Palestinians threatened to spiral out of control.

Nur Hassan, 30, and her daughter Rahaf Hassan, 2, were killed when their house in northern Gaza Strip sector Zeitun was demolished by the Israeli attack, medics said, with three others still trapped under the ruins.

Israel said it had targeted “two Hamas weapon manufacturing facilities” in response to two rocket launches at Israel during Saturday, as well as a number of attempts by Palestinians to violently break into Israel from Gaza.

One of the rockets had hit an open field in southern Israel and the other was intercepted, while nine Palestinians were killed during the border clashes with Israeli soldiers.

While Prime Minister Benjamin Netanyahu and president Mahmud Abbas have sought to avoid an escalation, frustrated Palestinian youths have defied efforts to restore calm and a wave of stabbings has spread fear in Israel.

Gaza had been mainly calm amid the week’s unrest elsewhere, but the recent clashes, rockets and air strike exacerbated fears that a wider Palestinian uprising, or intifada, could erupt.

Abbas as well as Netanyahu meanwhile spoke with US Secretary of State John Kerry, each putting the blame for the situation on the other.

Netanyahu said he told Kerry he expected the Palestinian Authority to stop its “wild and mendacious incitement, which is causing the current wave of terrorism”.

And Abbas said he reiterated the need for Israeli authorities to stop giving cover to “settler provocations, carried out under the army’s protection”.

Kerry had shared his “deep concern” over the violence in separate conversations with the two, his office said in a statement, and “stressed the importance of upholding the status quo in word and deed at the al-Haram al-Sharif/Temple Mount and of preventing inflammatory rhetoric and actions that will increase tensions.”

In Hebron, a Palestinian wounded in clashes with Israeli forces on Thursday died on Saturday night.

Medical sources identified him as Ibrahim Awad, 28, from Beit Umar, a village north of the southern West Bank city.

Clashes erupted after the Saturday funeral of a 22-year-old Palestinian in east Jerusalem’s Shuafat refugee camp, and one Palestinian who tried to throw a firebomb at security forces was shot in the leg, police said.

Meanwhile, there were more stabbing attacks, which have spread fear among Israelis.

Hours later in the same area, a 19-year-old also from Kafr Aqeb stabbed two police officers before himself being shot dead.

The stabbing victims in the second attack were in a “moderate” condition, medics said, with a third seriously wounded after being shot by another officer targeting the assailant.

Fourteen stabbing attacks have targeted Jews since October 3, when a Palestinian murdered two Israelis in the Old City, sparking a security crackdown.

Israeli police have struggled to prevent demonstrations among the country’s Arab population from deteriorating into violence.

Dozens of Arabs were arrested for throwing stones and firebombs at police and traffic, in a number of demonstrations throughout northern and central Israel.

Netanyahu announced Saturday he had ordered the emergency call-up of three reserve border police companies to reinforce officers in east Jerusalem and throughout Israel.