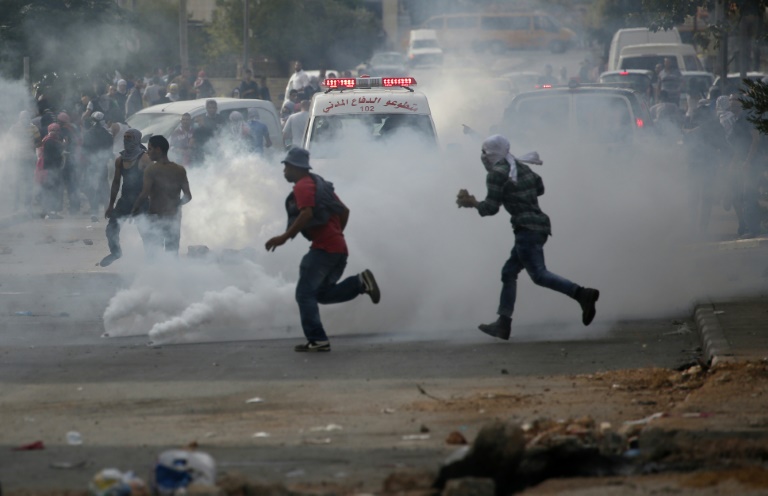 An Israeli air strike in Gaza killed a pregnant woman and her toddler and Hamas warned the Jewish state against “foolishness” Sunday as Palestinian unrest spun further toward a full-scale uprising.

After days of unrest elsewhere, Gaza has been drawn into the violence since Friday, with clashes along the border leaving nine Palestinians dead, including teenagers, from Israeli fire.

One of the rockets had hit an open field in southern Israel and the other was intercepted.

Israel’s retaliatory air strikes demolished a house in the northern area of Zeitun, killing Nur Hassan, 30, and her two-year-old daughter Rahaf, Gaza medics said, and trapping three others under the ruins.

It was unclear whether Hamas or another group fired the rockets. Salafists claiming links to the Islamic State group have claimed recent rocket fire from Gaza, but Israel holds Hamas responsible for all such acts.

In response to the air strike, a Hamas spokesman said “this shows the occupation’s desire to escalate.”

“We warn the occupation against continuing this foolishness,” said Sami Abu Zuhri.

Also on Sunday morning, Israeli security forces said they foiled an attack when an explosion seriously wounded a Palestinian woman and lightly injured an Israeli policeman.

The policeman had spotted a “suspicious” vehicle close to the Israeli settlement of Maale Adumim near Jerusalem and ordered the 31-year-old woman to stop.

She exited the car and the explosives inside it detonated, said police spokesman Mickey Rosenfeld.

The woman, from Jericho in the West Bank, shouted “God is great” in Arabic before the explosion went off.

“It was a female terrorist that intended to make her way into Jerusalem this morning,” said Rosenfeld, declining to provide further details.

Photos distributed by police indicated the blast was not especially powerful, with the car still intact.

Explosives had not been used in the week of violence that has led to an Israeli crackdown, with a wave of stabbings sparking fear among Israelis.

A settler couple was also shot dead in the West Bank on October 1 in front of their children and rioting has shaken annexed east Jerusalem and the occupied West Bank.

While Prime Minister Benjamin Netanyahu and Abbas have sought to avoid an escalation, frustrated Palestinian youths have defied efforts to restore calm.

The office of French President Francois Hollande said on Sunday that “everything must be done to… end this cycle (of violence) which has already caused too many victims”.

Both Abbas and Netanyahu have spoken with US Secretary of State John Kerry, each putting the blame for the situation on the other.

Netanyahu said he told Kerry he expected the Palestinian Authority to stop its “wild and mendacious incitement, which is causing the current wave of terrorism”.

Abbas said he reiterated the need for Israeli authorities to stop giving cover to “settler provocations, carried out under the army’s protection”.

Hours later in the same area, a 19-year-old also from Kafr Aqeb stabbed two police officers before himself being shot dead.

The stabbing victims in the second attack were in a “moderate” condition, medics said, with a third seriously wounded after being shot by another officer targeting the assailant.

Fourteen stabbing attacks have targeted Jews since October 3, when a Palestinian murdered two Israelis in the Old City.

Netanyahu has ordered the emergency call-up of reserve border police companies to reinforce officers in east Jerusalem and throughout Israel.