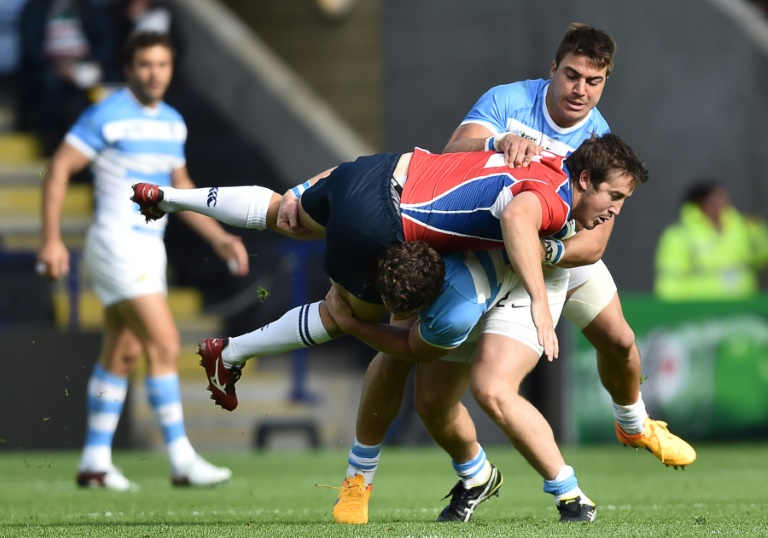 The opening try by the 33-year-old, known as the “Magician”, set up the Pumas for a convincing warm-up for their quarter-final in Cardiff next Sunday against France or Six Nations champions Ireland.

The Pumas made up for an early penalty miss by Santiago Iglesias from in front of the posts with a splendid try in the seventh minute fashioned and finished by Hernandez.

He began the move passing to Matias Moroni on his wing and the 24-year-old came inside before offloading to Hernandez who ran it in for his seventh Test try. Iglesias converted.

Namibia’s challenge became ever more harder as centre JC Greyling was sent to the sin bin by Pascal Gauzere for making no effort to tackle his opponent with his arms.

Iglesias made it 10-0 from the resulting penalty but it was Namibia who bit back.

A lacksadaisical pass by Hernandez was seized upon by Johan Tromp, who kicked it ahead, the ball bounced into his arms and he touched down under the posts for his second try of the tournament.

Theuns Kotze converted for 10-7 and rouse the crowd from its torpor.

Lax Namibian defending though allowed Moroni — who had come in off his wing — to break four tackles and skate over for his first try for his country. Iglesias converted for 17-7.

Wing Horacio Agulla notched their third try — Iglesias converted — and Facundo Isa went over for the fourth try which sparked pushing between the two packs.

The Pumas had a fifth shortly before half-time another scrappy effort which resulted in prop Lucas Noguera picking the loose ball up from a metre out and touching down. Iglesias converted for a half-time score of 36-7.

Greyling’s smile returned when he grabbed a loose ball and broke an Argentinian tackle to run in and score their second try, raising his arm in the air as he approached the line. Kotze converted for 36-14.

Matias Alemanno went over for another try, converted by Iglesias for 43-14 but the South American side were reduced to 14 shortly after when replacement Marcello Bosch was sin-binned for a spear tackle on Kotze just after coming on.

Leonardo Senatore rounded off a superb Argentinian move for yet another Pumas try — Juan-Pablo Socino added the extras to bring up the half century.

Julian Montoya was on the end of another flowing Pumas move to dot down for their eighth try and Tomas Cubelli added a ninth.

Namibia got on the wrong side of the officials again with five minutes remaining as Tinus du Plessis was sin-binned for taking out his man in the air.

However, there was still time for the Namibians to score a try right at the death Eugene Jantjes tuching down and in a nice touch veteran prop Johnny Redelinghuys was given the honour on his 50th and final appearance for his country to try the conversion. His effort just missing.