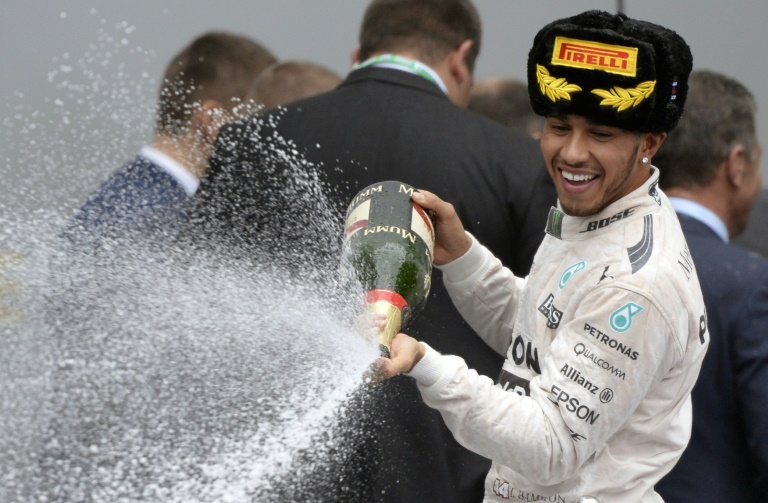 The defending world champion started second on the grid, inherited the lead when Rosberg slowed and then retired, after seven laps, with throttle pedal problems and claimed his ninth win of the season.

With this 42nd career win he passed his boyhood hero Ayrton Senna’s tally in the record books.

And crucially it lifted the Briton up to 302 points in the world championship, with Sebastian Vettel, who took second in his Ferrari, now on 236 points, 66 adrift, with Rosberg now 73 points behind on 229.

If the cards fall in his favour Hamilton can clinch the 2015 title in the next race in the United States on October 25 — he needs to beat Vettel by nine points and Rosberg by two.

“I honestly did not know that, but I am just going to take it race by race and concentrate on that,” he said.

“I don’t take what we have for granted, but it’s a special moment for me to surpass Ayrton.”

Despite his ill luck Rosberg refused to concede the drivers’ title.

“Formula One is pretty incredible sometimes, how tough it is,” he said.

“I am never going to win a championship like that when normal things break on a day when I should have won the race, but I will come back, as I always do.”

In a race with two safety car interventions, several accidents and a series of retirements, Carlos Sainz who had crashed heavily in his Toro Rosso on Saturday, was passed fit to start from the back of the grid, rose to 10th and retired after spinning off in the closing laps.

The second came after 12 laps when Romain Grosjean crashed heavily in his Lotus and climbed out of the wreckage unhurt.

Another crash on the final lap, involving Finns Raikkonen and Valtteri Bottas of Williams as they battled for third gave the position instead to Sergio Perez who claimed only the third podium in the Force India teamâ€™s history.

The Mexican smiled: “It’s just feels great to be back. One lap before the end it seemed like everything went away from us. I was very unhappy with myself but in the end I thought ‘I gave it all’.

“On the last lap when it came it was just amazing.”

Bottas was upset, declaring: “I got past Perez and approaching Turn Four someone hit me from behind.

“It’s really disappointing because it’s ruined my day. I guess he (Raikkonen) will get a penalty, but I would have to see the videoâ€¦ It feels bad when it ends like this.”

Raikkonen was subsequently docked 30 seconds, demoting him to eighth, for his part in the incident.

Pastor Maldonado took seventh in the revised placings followed by Raikkonen, and the two McLaren cars both claimed points with Jenson Button finishing ninth and Fernando Alonso 10th, having started on the back row of the grid.

Sainz, in his rookie season, started cleanly in his Toro Rosso, but in the midfield pack, Nico Hulkenberg in his Force India spun and tangled with Marcus Ericssonâ€™s Sauber after hitting Max Verstappenâ€™s Toro Rosso.

This resulted in a Safety Car signal that re-packed the field behind Rosberg as Russian President Vladimir Putin watched on from the stands.

On the restart, Rosberg reported his throttle pedal problem, Mercedes advising him to hit his brakes to fix it.

The Germanâ€™s difficulties continued and he was soon passed by Hamilton with Rosberg twice went off circuit before heading back to the pits.

By lap seven, it was all over.

“The pedal popped back completely, but it was still revving,” said Rosberg as the team informed Hamilton of his plight and instructed him to re-focus and win.

On his seemingly cast-iron title prospects Hamilton said: “I never get to the point where I think it’s done and dusted. The goal is still to make sure I have it when I cross the line in Abu Dhabi.”