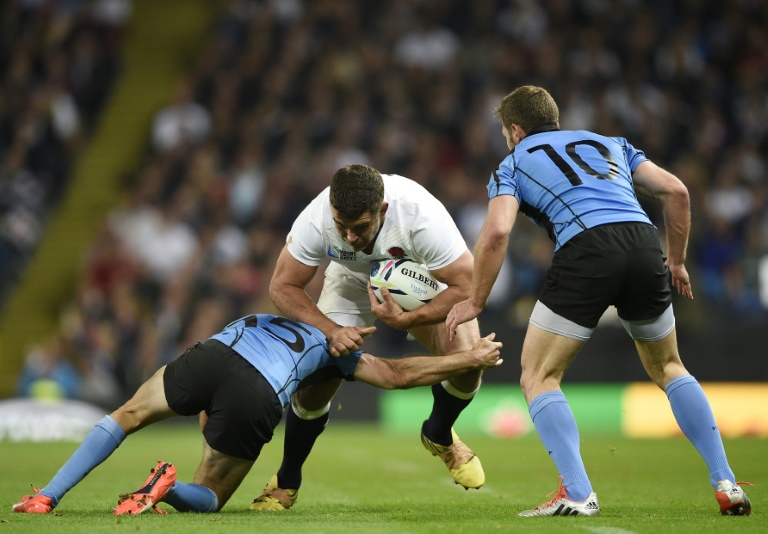 Nick Easter signed off with a hat-trick of tries in probably his final Test but he was keener to talk up the bright future of the England rugby team despite their World Cup disaster.

The 37-year-old backrow forward — who was appearing in his third World Cup — was not the only England player to notch up three tries in the 60-3 rout of Uruguay, wing Jack Nowell at the other end of the age scale at 22 being the other.

The likes of Nowell, his Exeter team-mate Henry Slade, Jonathan Joseph and Anthony Watson are all 24 or younger.

“I think itâ€™s really exciting,” said Easter, who was named man of the match.

“The pool of the talent is there and the potential for world class players is there.

“Unfortunately, we were beaten by two good teams (28-25 by Wales and 33-13 by Australia) when it went down to the wire and we just weren’t good enough.

“But these young guys will harbour that hurt and thereâ€™s enough guys with enough experience there.”

“Itâ€™s just about getting that consistency and learning from the losses. They have to remember those losses because that is what will drive them on.”

Easter, who was called into the squad when Billy Vunipola suffered a knee injury in the loss to Wales a fortnight ago, said the upcoming review of the failed campaign should not just go through the formalities but be an in-depth look at the weaknessess and strengths of the preparation and selections of the coaching staff.

Easter has bitter experience of post World Cup reviews, having been part of the 2011 debacle under Lancaster’s predecessor Martin Johnson.

On that occasion he will forever be known for his remark “that’s Â£35,000 ($53,000) gone down the toilet,” after England lost to France in the quarter-finals.

New revelations on Sunday claimed head coach Stuart Lancaster had recommended selecting Luther Burrell at centre, but had been out-voted as his fellow coaches opted for rugby league convert Sam Burgess, who plays in the back row for his club Bath.

Burrell burst into tears when he was informed he would not after all be in the squad.

“We havenâ€™t performed as well as we should have,” said Easter, who coaches from time to time the third tier Wimbledon side for free.

“There canâ€™t be any knee jerk reaction. It has to be thorough.”

“Speak to the players, speak to the manager and just make sure it is thorough and the right decisions are made.

“The coaching staff will learn from it as much as the players and itâ€™s just been unfortunate that our momentum stalled.”