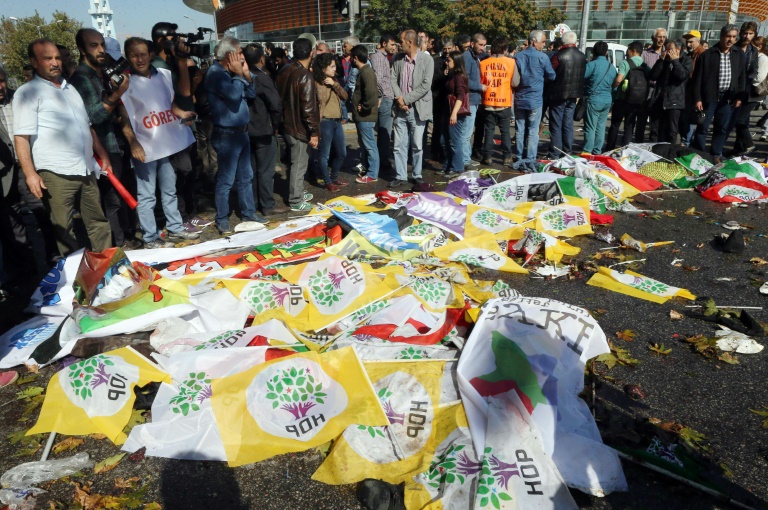 The square in front of Ankara’s central train station was to have been the venue for a peace rally attracting people from different leftist and Kurdish groups.

But at 10:04 am, everything changed, in a moment that will mark Turkey forever.

The area was plunged into scenes of unimaginable horror as two suspected suicide bombers carried out the deadliest attack in the history of modern Turkey.

Dozens of bodies littered the asphalt, with bloodstains extending hundreds of metres. Crying and tears were audible from every direction.

Seconds before the twin explosions, the activists, who included several members of the pro-Kurdish Peoples’ Democratic Party (HDP) had been filmed happily joining hands and dancing in celebration.

Then the explosion goes off and the activists either fall to the ground or run for cover.

The dead lay side-by-side as they had fallen before being taken away to the morgue. Many were swathed in the same banners they had taken to the event, including those of the HDP.

“I saw a man with his leg torn off lying on the ground. I also saw a torn-off hand on the asphalt,” said Sahin Bulut, 18, member of the Istanbul association of engineers.

The power of the blast blew out windows high up on the Ankara railway station, the main hub of Turkey’s growing rail network.

The attacks put a knife through the heart of Ankara, which became capital following the founding of the modern Turkish Republic by Mustafa Kemal Ataturk.

Known as a relatively ordered place compared to the chaos that can engulf Istanbul, the city had never known anything like violence on this scale.

Within two hours of the explosions, units of police in bullet proof vests and with automatic weapons in their hand surrounded the scene and cordoned off the area.

The sirens howled as the ambulances took survivors to Ankara hospitals. Urgent appeals for blood were made though social media.

Around the human remains and the corpses numerous ball bearings could be seen, used in bombs to cause the maximum damage and injury.

“There are people who died immediately, others who were very badly wounded. It’s a true massacre,” said a lawyer who came to supervise the demonstration, who asked not to be named.

In scenes of panic and desperation, dozens of people sought to find their loved ones amid the chaos.

Among the shocked survivors anger grew, accusing the security forces of not properly assuring security at the demonstration.

“None of the demonstrators who came were properly checked by the security forces,” said Ahmet Oren.

Such is the anger, that a group of demonstrators targeted a police chief and the security forces fired into the air to disperse the protesters.

“This, I have never witnessed in my life,” said one policeman.