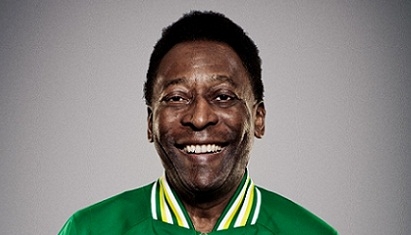 A war was ceased to see this legendary footballer in action, while the Shah of Iran waited three hours just to speak to him.

With a killer instinct, an eye for the perfect pass and supreme athleticism, he epitomised the flair, joy and passion Brazilians brought to the game.

‘The King of Football’ catapulted the popularity of football astronomically, becoming a global ambassador of the sport.

Pele was born Edson Arantes do Nascimento on October 23, 1940 in Três Corações, Minas Gerais, Brazil. He was named after Thomas Edison but was originally nicknamed “Dico” by his family. He often skipped school to practice soccer in the fields.

His father struggled to earn a living as a football player, and Pele grew up in poverty. To try to earn money for a soccer ball, Pele shined shoes and sold roasted peanuts outside movie theaters.

He received his early lessons in football from his father and played for various amateur teams in his youth.

Pele created his own reputation as a football player with the Bauru Athletic Club. His skills were noticed by a former World Cup player, Valdemar de Brito, who took him to Santos, a midlevel club team on the coast of Brazil. In his first full season at Santos, he scored a league-leading 32 goals. Soon afterward, he was selected for Brazil’s 1958 World Cup.

The world was officially introduced to Pele in the 1958 World Cup in Sweden. The 17-year-old erupted to score three goals in a 5-2 semifinal win over France, and then netted two more in the finals, a 5-2 win over the host country.

The young superstar received hefty offers to play for European clubs. However Brazilian President JÃ¢nio Quadros declared Pele as a national treasure, making it legally difficult for him to play in another country. Regardless, Santos club ownership ensured its star attraction was well paid by scheduling lucrative exhibition matches with teams around the world.

A groin injury forced Pele to watch the 1962 World Cup from the sidelines. Four years later, in England, a series of brutal attacks by opposing defenders again forced him to the sidelines with leg injuries as Â Brazil was bounced from the World Cup after one round.

The 1970 World Cup in Mexico marked a triumphant return to glory for Pele and Brazil. Headlining a formidable squad, Pele scored four goals in the tournament, including one in the final to give Brazil a 4-1 victory over Italy.

Pele announced his retirement from soccer in 1974, but he was lured back to the field the following year to play for the New York Cosmos in the North American Soccer League,

He played his final game in an exhibition between New York and Santos in October 1977, competing for both sides, and retired with a total of 1,281 goals in 1,363 games.

After Pele retired, he took his energy as an athlete and put it into his career as a global pitchman and ambassador for football.

He has spent time broadcasting, writing columns, representing products such as Coca-Cola, MasterCard and Viagra, and even dabbling in politics when he became Brazil’s Minister of Sport in 1994.

In 1992, Pele was appointed a UN ambassador for ecology and the environment.

Pele married Rosemeri dos Reis Cholbi in 1966. They had two daughters and a son.

From 1981 to 1986, Pele had been romantically linked with Xuxa and was seen influential in launching the career of the model who was 17 when they started to date.

Pele had had another daughter, Flavia Kurts, in an extra-marital affair in 1968 with a journalist called Lenita Kurtz. Pele, aged 73, has announced he is planning to marry 41-year-old Marcia Cibele Aoki, a Japanese-Brazilian importer of medical equipment, who he has been dating since 2010.