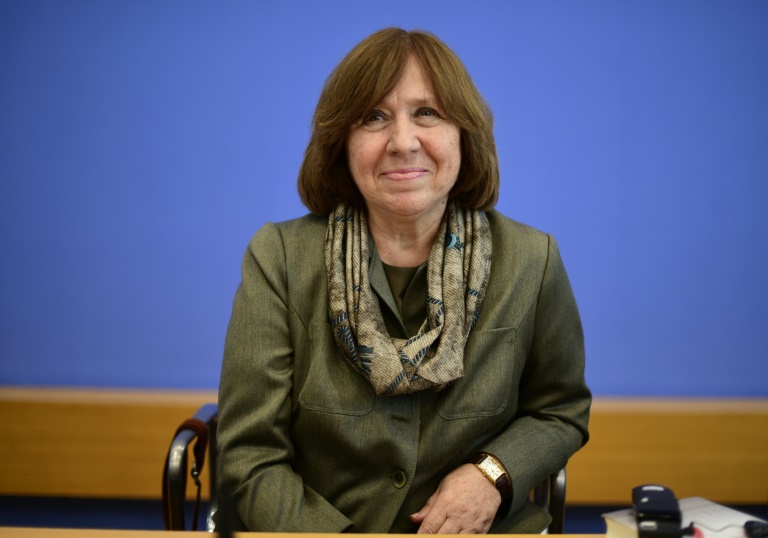 Newly-crowned Nobel Literature Prize laureate Svetlana Alexievich told Europe on the eve of a presidential election in her country that Belarus was a “soft dictatorship” and the incumbent Alexander Lukashenko was all but certain to extend his two-decade grip on power.

“Every four years, new European officials come to power and think they can solve the Lukashenko problem without knowing that he is a man who is untrustworthy,” the author and journalist told a news conference in Berlin, two days after winning literature’s highest accolade.

“He is a ‘Soviet man’ and will never change,” Alexievich said, referencing “Homo sovieticus”, a sarcastic pseudo-Latin term for those in former Soviet states who have difficulty shaking off the authoritarian mindset of the past.

Belarus remains “a soft dictatorship”, she said, predicting an easy win on Sunday for Lukashenko, 61, who is seeking a fifth consecutive term.

“No one doubts that Lukashenko will win… We all suspect that for Lukashenko it doesn’t matter how we will vote, what is important is those who will count the ballots, and so there will be no surprise,” the 67-year-old said.

Meanwhile in Minsk, opposition activists warned the European Union not to rush into lifting sanctions against Lukashenko after EU sources on Friday said the bloc was ready to suspend the measures in response to the surprise release in August of the country’s last political prisoners.

The six freed opposition leaders included Mikola Statkevich, who was jailed after running against Lukashenko in 2010.

The EU sanctions entail travel bans and asset freezes against Lukashenko and around 170 other individuals and 14 groups imposed in January 2011 for alleged human rights violations.

The sources said a decision on lifting the sanctions would be taken before October 31. One source said the decision would hinge on Sunday’s polls passing off peacefully.

But at an opposition rally in the Belarussian capital Saturday Statkevich himself urged the bloc to stand firm against Lukashenko.

“These people in the eyes of Belarussians will seem traitors to their ideals,” Statkevich said of European officials.

The opposition figures leading the demo linked arms at the head of a column of some 400 protesters and urged the crowd to boycott tomorrow’s vote, while demonstrators shouted slogans such as “Sasha, leave!” referring to Lukashenko, and some waved EU flags.

He too condemned the idea of rewarding Lukashenko for good behaviour. “We know one thing: with Lukashenko in power, the situation will never change,” he said.

He added that Saturday’s unauthorised protest had only attracted a relatively small turnout because “people are just afraid.”

Lukashenko is standing against three virtual unknowns in the presidential vote, one of whom, Tatiana Korotkevich is running a mildly oppositional campaign.

By providing the only alternative for opposition supporters, 38-year-old Korotkevich has made a strong showing in opinion polls, but even her team doubts she could push the election into a second round.

Lukashenko congratulated Alexievich for her Nobel win on Thursday, even though none of her books — which chronicle the horrors of war and life under the Soviet regime — are published in her home country in what the author has described as “a creeping censorship”.

Alexievich also accused Lukashenko of playing a “well-honed” tactical game with the Europeans, to whom “he turns as soon as relations with Moscow deteriorate”.

The two countries are currently locked in a spat over whether Russia can open an air base in Belarus as Moscow flexes its military might.

Even so, Lukashenko is propped up by Russia, which supplies the country of 9.5 million with cut-price energy, valuing Belarus as an ally and buffer against NATO member states such as Poland.

Alexievich also sees the Belarussian leader as capitalising from the current tensions between Moscow and Brussels over the conflict in Ukraine by acting as a mediator, hosting peace talks in Minsk between Kiev and the pro-Russian separatists.

She held out little hope of greater democracy in either Russia or Belarus, saying authoritarian roots were deeply enmeshed in both countries.

“The situation in Russia and Belarus will last a long time to come,” she said.

“We have the naive hope that democracy will come, but to have freedom we need free men.”