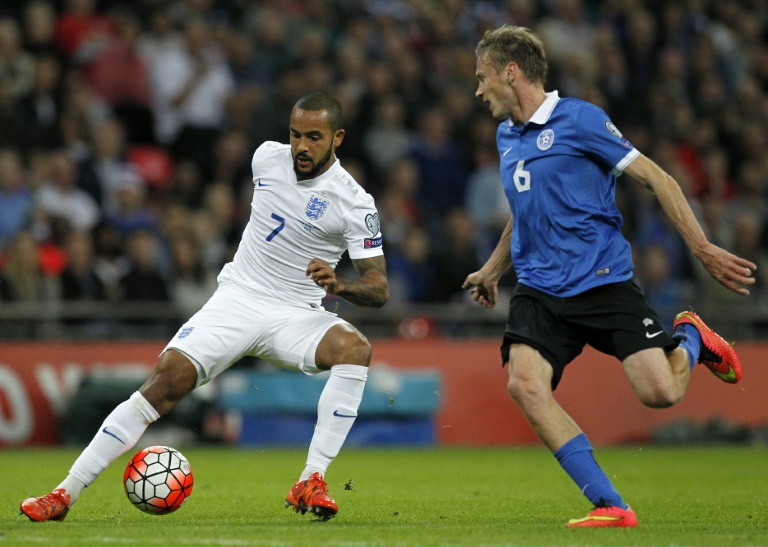 Theo Walcott strengthened his claim to a central striking role as England defeated Estonia 2-0 at Wembley on Friday to register a ninth win in nine Euro 2016 qualifiers.

With record goal-scorer Wayne Rooney injured, Harry Kane led the line for England, but it was Walcott who opened the scoring in a drab game before Raheem Sterling struck a second goal late on.

It gave Roy Hodgson’s side, who have already qualified, a ninth consecutive win in Group E and kept them on course to become only the sixth team to win all of their matches in a European Championship qualifying campaign ahead of Monday’s final game away to Lithuania.

But Slovenia’s draw with Lithuania in the evening’s other group game means that Estonia, who also lost 1-0 in the reverse fixture, have only a mathematical chance of reaching next year’s tournament in France.

Before kick-off Rooney was presented with a golden boot by Bobby Charlton for netting a record 50th England goal last month, but with the captain sidelined by an ankle injury, Chelsea centre-back Gary Cahill led the team out for the first time.

Lining up in a 4-1-4-1 system and showing five changes from last month’s 2-0 defeat of Switzerland, England looked to Ross Barkley and Adam Lallana to set the tempo as they set up camp inside the Estonian half.

It took less than four minutes for them to register a shot on target, Estonia goalkeeper Mihkel Aksalu parrying a crisp half-volley from Walcott, but frequently their approach play broke down at the final pass.

Barkley had two chances, but the Everton playmaker was put off on one occasion by Ken Kallaste and then shot straight at Aksalu after the visiting goalkeeper had pushed Ryan Bertrand’s cross into his path.

Fresh from a fine display in Arsenal’s 3-0 win over Manchester United, Walcott drilled wide after cutting in from his station on the right flank and also saw an effort deflected into the side-netting by Taijo Teniste.

With half-time imminent, he put the hosts ahead, darting into the box to collect an imaginative and carefully weighted through ball from Barkley and placing the ball wide of Aksalu.

It was the former Southampton player’s eighth goal in 42 international appearances and his seventh goal in nine matches for club and country.

Hodgson had said that Rooney’s injury put Kane in “pole position” for the role of main striker, but the Tottenham Hotspur man failed to grasp the opportunities that came his way.

He miscued an attempted volley from a Nathaniel Clyne cross early in the second half and was then thwarted at close-range by Aksalu after the goalkeeper had saved from Lallana.

Barkley, meanwhile, mixed bad with good, running down a blind alley one minute, weaving past three opponents and shooting narrowly wide the next.

The 21-year-old also produced the only moment of real quality in a dire second half, shimmying between two defenders and unleashing a rasping shot that Aksalu had to push over the bar.

Sterling netted England’s second goal in the 85th minute, polishing off a cross from substitute Jamie Vardy, before 19-year-old Tottenham midfielder Dele Alli came on for his international debut, with Barkley departing.