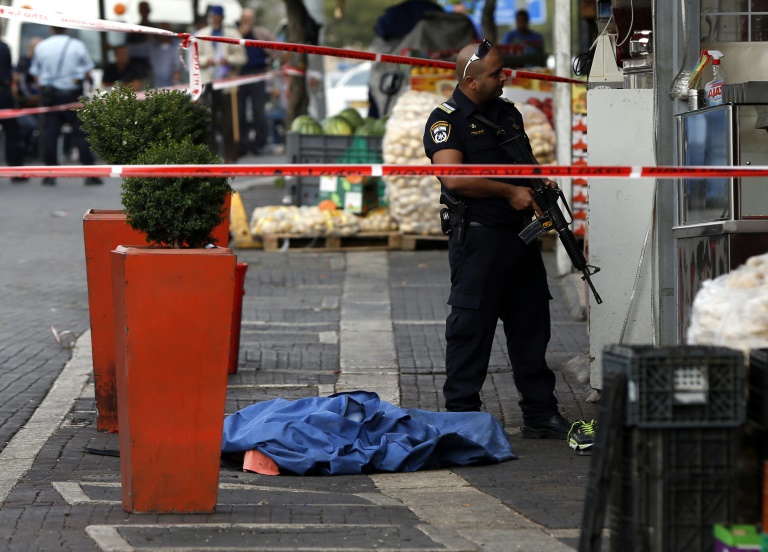 A week of spiralling violence between Israelis and Palestinians saw more clashes and demonstrations Saturday and two more stabbings in Jerusalem, in which the Palestinian assailant were shot dead.

Israeli Prime Minister Benjamin Netanyahu and Palestinian president Mahmud Abbas have sought to avoid an escalation, but frustrated Palestinian youths have defied efforts to restore calm and a wave of stabbings has spread fear in Israel.

The rocket, for which there was no immediate claim of responsibility, caused no casualties. Israel regularly responds to rocket fire with air strikes, but had not done so by Saturday afternoon.

Clashes erupted after his funeral, and one Palestinian who attempted to throw a firebomb at security forces was shot in the leg, police said.

The Gaza Strip had been mainly calm amid the week’s unrest elsewhere, clashes Friday exacerbated fears that a wider Palestinian uprising, or intifada, could erupt.

The army said there had been repeated attempts to storm the border fence between Gaza and Israel and that 1,000 rioters had infiltrated the buffer zone, throwing a grenade, rocks and rolled burning tyres at troops.

Warning shots had been fired first, after which fire was directed “towards main instigators in order to prevent their advance and disperse the riot,” a statement said.

Seven Palestinians were killed, including a 15-year-old, and 145 wounded, medics said.

Following the funeral Saturday of one of those killed, hundreds of young Palestinians approached the border with Israel and began demonstrating there.

But unarmed Hamas security forces in civilian clothes arrived at the scene and dispersed the demonstrators peacefully, eyewitnesses said.

Friday was the worst day of violence in the Palestinian enclave since the 2014 summer’s war with Israel, which killed more than 2,200 and left 100,000 homeless.

The clashes came as Hamas’s chief in Gaza, Ismail Haniyeh, called the violence an intifada and urged further unrest.

On Saturday, Jordan’s parliament condemned “the crimes committed by Israeli forces in the West Bank and Gaza,” accusing Israel of “state terrorism” and “sapping the rights of the Palestinians on their own lands.”

Hamas, which rules Gaza, remains deeply divided from Abbas’s Fatah, based in the West Bank.

Some have called for coordination in order to build a resistance movement, but it is unclear whether the various Palestinian factions would be able to do so.

“It’s not important whether we call it an intifada or a popular uprising,” Fatah official Mahmud al-Alul told AFP. “What’s important is that the people and all the movements are united on the ground.”

In the southern West Bank city Hebron, youths clashed with Israeli forces after funerals of two residents of the area, killed after carrying out separate attacks on security forces earlier this week.

There were no immediate reports of casualties.

Police said they shot and killed the 16-year-old assailant, identified as Ishak Badran of Kafr Aqeb in east Jerusalem.

Hours later, a man described as an “Arab terrorist” was shot dead after stabbing and wounding three police officers, one of them seriously, police said.

That made 14 the number of stabbing attacks targeting Jews since October 3, when a Palestinian murdered two Israelis in Jerusalem’s Old City, setting off a security crackdown.

One revenge stabbing has occurred, with a 17-year-old Jew in the southern Israeli city of Dimona wounding two Palestinians and two Arab Israelis Friday.

Netanyahu quickly condemned the attack by the Jewish youth, a sign of concerns that it could trigger further violence.

Abbas has spoken out against violence and in favour of “peaceful, popular resistance”, but many Palestinian youths are frustrated with his leadership as well as Israel’s government.

Israeli police have been struggling to prevent ongoing demonstrations among the country’s Arab population from deteriorating into widespread violence.

On Friday night, they arrested 10 Arab men for throwing stones and firebombs and rolling burning tyres at security forces in the north of the country.

Police also detained five Jews from the northern coastal city of Netanya who during a clash with Arabs from nearby town Taibe on Thursday chanted “Death to Arabs”.