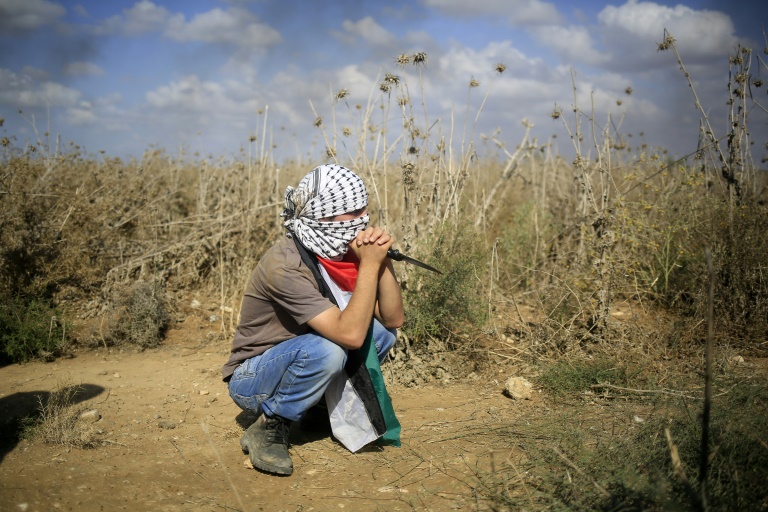 A week of violence between Israelis and Palestinians spread to the Gaza Strip Friday, with Israeli troops killing six in clashes on the border and Islamist movement Hamas calling for more unrest.

A fresh wave of stabbings also hit Israel and the West Bank, including a revenge attack by a Jewish suspect that wounded two Palestinians and two Arab Israelis.

The Gaza Strip had been mainly calm as unrest has shaken annexed east Jerusalem and the occupied West Bank in recent days.

But clashes broke out on Friday east of Gaza City and Khan Yunis along the border with the Jewish state, with Israeli forces opening fire and killing six Palestinians including a 15-year-old, and wounding 80, according to medics.

Hundreds of Palestinians, some with their faces covered by keffiyeh scarves, defied the soldiers by making victory signs and throwing stones.

It was the deadliest clash in Gaza since the summer 2014 war with Israel.

“Forces on the site responded with fire toward the main instigators to prevent their progress and disperse the riot,” an army spokeswoman said.

The clashes came as Hamas’s chief in Gaza called the spreading violence an intifada, or uprising, and urged further unrest.

In a sermon for weekly Muslim prayers at a mosque in Gaza City, Ismail Haniya said “we are calling for the strengthening and increasing of the intifada”.

“It is the only path that will lead to liberation,” he said. “Gaza will fulfil its role in the Jerusalem intifada and it is more than ready for confrontation.”

In a number of Arab towns in Israel’s north, masked youths blocked roads with burning tyres and hurled fire bombs and stones at police who arrested three suspects in Taibe, two near Ara and one in Qalansuwa before the riots were dispersed.

Stabbing attacks in the West Bank, Jerusalem and Israel itself along with rioting have raised fears of a third Palestinian intifada, following a first that began in 1987 and a second in 2000.

Those two conflicts cost the lives of some 5,000 Palestinians and around 1,100 Israelis.

The enclave has been hit by three wars with Israel since 2008. A 50-day conflict between Palestinian militants in Gaza and Israel in the summer of 2014 left more than 2,200 people in the territory dead and 100,000 homeless.

Friday’s stabbings included one by a 17-year-old Jew in the southern Israeli city of Dimona that lightly or moderately wounded two Palestinians and two Arab Israelis.

The teenager told police who arrested him he had acted because “all Arabs are terrorists”.

This was the first such incident against Palestinians after multiple stabbings that have targeted Jews since Saturday, killing two.

Israeli Prime Minister Benjamin Netanyahu quickly condemned the attack by the Jewish youth, a sign of concerns that it could trigger further violence.

Attacks also continued against Israelis and Jews, with a Palestinian stabbing and lightly wounding a policeman near a West Bank settlement before being shot dead by the victim.

A Jewish 16-year-old was slightly hurt in a stabbing in Jerusalem by an 18-year-old Palestinian suspect, who was arrested.

And an Arab Israeli woman was shot and wounded when she tried to stab a security guard at a bus station in the northern Israeli town of Afula, police said.

Video footage appeared online of the incident showing the veiled woman appearing to hold a knife while surrounded by security forces yelling at her before she is shot.

There have been 13 stabbings since Saturday, including the revenge assault. Five of the alleged attackers have been killed.

Friday’s escalation came as Israeli security forces sought to prevent the further spread of Palestinian unrest, with Netanyahu having said the country faced a mostly unorganised “wave of terror”.

Abbas has spoken out against violence and in favour of “peaceful, popular resistance”, but many youths are frustrated with his leadership as well as Israel’s government.

Fresh clashes between Palestinians and Israeli security forces broke out Friday in various parts of east Jerusalem and the West Bank, including near Ramallah after the funeral of Mohannad Halabi, a 19-year-old killed after allegedly stabbing two Jews to death in Jerusalem’s Old City on Saturday.

“We’re currently in a spiral that appears to be heading toward escalation,” said Ido Zelkovitz, an expert on Palestinian history at Haifa University.

“The current clashes are being led by a young generation with no collective memory of the second intifada, which created very strong deterrence among the Palestinian leadership.”