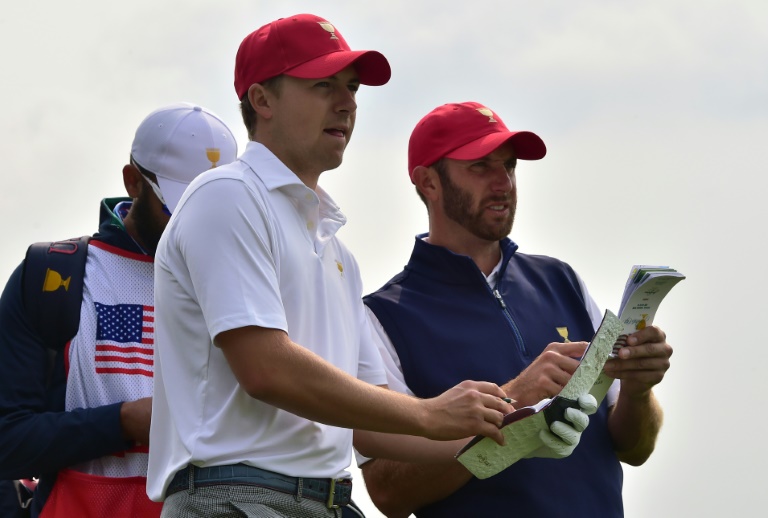 Jordan Spieth showed just why he is the world number one on Saturday with a scintillating display of golf to maintain a slender US lead over the International team.

Spieth rattled in eight birdies including a magnificent hole out from a greenside bunker as he and Patrick Reed fought back to overcome world number two Jason Day and Charl Schwartzel 3 and 2 in the final match that ended in almost total darkness at the Jack Nicklaus Golf Club in Incheon, South Korea.

It meant both Saturday’s afternoon fourballs and foursomes had been shared 2-2. The US lead 9.5-8.5 going into Sunday’s 12 singles with 15.5 points needed for victory.

The highlight of a round that included three twos at the par three fifth, eighth and 13th holes was when the double 2015 Major champion holed out spectacularly from a deep greenside bunker on the 12th.

The day’s play had been delayed for an hour after heavy overnight rain and with three of the morning foursomes going the distance the players were racing against fading light to finish the last match out which began an hour and a half later than scheduled at 1:50 pm local time.

Down by one hole after six, Spieth’s spectacular display turned the match on its head and left the US duo four up with five to play. Despite a fast setting sun it seemed there would be little problem finishing out.

But the International team halved the next, Schwartzel then birdied the 15th and Spieth lipped out with a putt to win the match to leave them three up with three to play and the sun now well below the horizon.

By now even the TV cameras were struggling to the see the ball in the post-dusk gloom but the players opted to play out the 16th rather than come back early on Sunday.

It ended in near farcical scenes as no one could see ball or cup on the green as a succession of birdie attempts slid by to enable the Americans to close out victory.

Spieth, alongside Dustin Johnson, had also faced Day and Schwartzel in the morning foursomes and came out on top by 1 hole after being one down with two to play.

But it was in the afternoon the Spieth showed his majestic best against great rival and US PGA Champion Day, who had three birdies of his own but could not live with Spieth and his deadly putter.

Spieth and Reed formed a formidable team in last year’s Ryder Cup and were playing together for the first time since.

“I had been told earlier on that I was going to team up with my ex-girlfriend here, Patrick,” laughed Spieth.

“And boy, we rattled off a lot of putts. I think we were nine- or 10-under with no bogeys.”

“Those guys are great together,” said team mate Zach Johnson who with Phil Mickelson beat Adam Scott and Anirban Lahiri 3 and 2. “I don’t know why, but they are.”

They blew away the American pair Jimmy Walker and Chris Kirk 6 and 5 with birdies at nine of the first 11 holes.

Only twice before has a match ended after fewer holes in Presidents Cup history.

A record was set by South African pair Branden Grace and Louis Oosthuizen, who became the first pair ever for the International team to win four out of four team matches.

“I don’t think anyone really sees that coming,” said Oosthuizen after they beat Bubba Watson and J.B Holmes in a pulsating encounter.

It wasn’t decided until Grace lashed a perfect 260-yard second shot to the treacherous par five 18th to set up an easy birdie to settle matters.

“You need to click with your partner and you need to play well.

“I think that was the best match I’ve been involved with this afternoon. The chip-in on 16 and the second on 18. Branden just showed that he’s a world-class player and there’s no moment too big for him.”