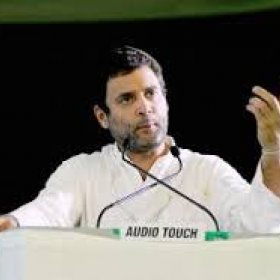 After day long meetings with farmers and party leaders, Congress Vice President Rahul Gandhi today interacted with entrepreneurs from various startups in the IT city.

“Glad that our Karnataka government has taken the lead in formulating a comprehensive startUp policy for the state”, the tweets said.

About 15 entrepreneurs from different domains including Meena Ganesh, CEO & MD Portea and Hari Menon, Co-founder of Bigbasket were part of the meeting.

Few entrepreneurs from Mysuru and Udupi also participated in the meeting.

“Entreprenuers from different domains participated in the event, they discussed various issues concerning startups and areas where they would require help from government of Karnataka,” Member of Parliament Rajeev Gowda, also part of the meeting, said.

He said they also discussed the startup policy by the state government.

The meeting was attended by Industries Minister R V Dehpande, IT Minister S R Patil and Food and Civil Supplies Minister Dinesh Gundurao from the government side.

Senior Congress leaders like former Chief Minister S M Krishna and Digvijay Singh, in charge of party affairs of Karnataka, were also part of the meeting.