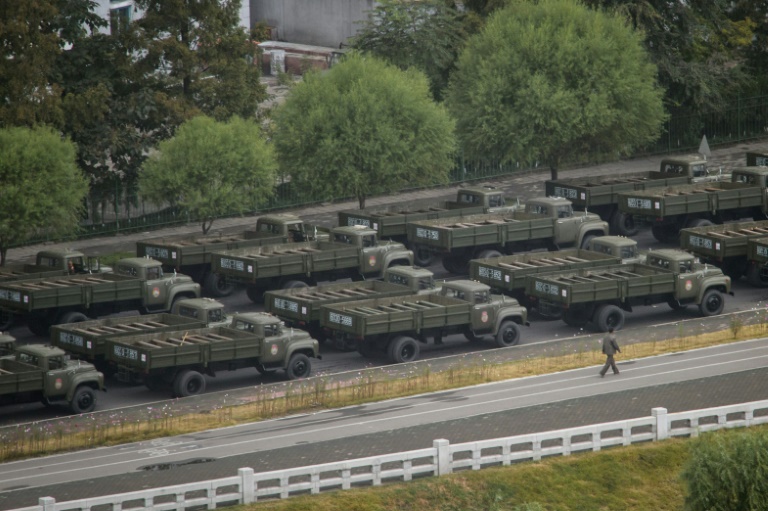 The North Korean capital Pyongyang braced Saturday for what was predicted to be one of the largest ceremonial displays of military strength in the nuclear-armed nation’s history.

A cavalcade of tanks, armoured vehicles and assorted ballistic hardware was set to rumble through the city’s Kim Il-Sung Square, with thousands of hard-marching troops for escorts, in celebration of the ruling Workers’ Party’s 70th birthday.

One thing the organisers could not control was the weather, with an overnight thunderstorm and light rain in the morning threatening to put a dampener on the whole event.

As of 11:30 am (0300 GMT) — with the roads slick with rainwater — there was still no formal announcement of when the parade would actually begin.

But hundreds of military trucks, used to ferry participants to the parade venue, were lined up along the banks of the capital’s Taedong River, suggesting the event would go ahead.

Taking the salute from the massed military ranks will be supreme leader Kim Jong-Un, the third generation of a family dynasty that has ruled the North with absolute authority for the past seven decades.

Kim paid tribute to that legacy with a midnight visit Friday to the Kumsusan Palace of the Sun, which serves as the mausoleum for his father Ki Jong-Il and grandfather Kim Il-Sung, North Korea’s founding leader.

The scale of Saturday’s parade was already apparent from satellite images taken four days before, which showed a sprawling training ground in Pyongyang featuring some 800 tents, 700 trucks and 200 armoured vehicles.

As with similar displays in the past, the event will be closely watched for glimpses of any new hardware that might signal a forward step in the North’s military development.

When announcing plans for the “grand-style” parade back in February, the ruling party’s top decision-making body had stressed the importance of “cutting-edge” weaponry suitable for modern warfare.

North Korea has conducted three nuclear tests and threatened a fourth as part of a nuclear weapons and missile programme that it has pursued through a barrage of international sanctions.

There is debate among experts as to how far it has come in developing those weapons, especially the ability to shrink nuclear warheads so that they can fit on a missile.

An exhaustively researched report published this week by the US-based Institute for Science and International Security estimated that North Korea had between 10 and 16 nuclear weapons as of the end of 2014.

The report argued it was likely the country could already build a warhead to fit atop a Nodong missile — with a range of less than 800 miles (1,300 kilometres) — but added that the reliability of such a weapon was open to question.

Months of planning and preparation have gone into Saturday’s parade, involving a mass mobilisation of state personnel and resources to ensure its success.

The capital itself was given a comprehensive makeover — its streets lined and decorated with giant posters, red banners and national flags, many of them displaying the numerals “10-10” in reference to the ruling party’s official October 10 birthday.

The North excels at such choreographed displays of military muscle, which aim to boost pride and patriotism at home while sending a defiant message to an international community that has sought, without success, to pressure Pyongyang into abandoning its nuclear weapons ambitions.

Kim and Liu met for talks on Friday, during which the Chinese official delivered a letter from President Xi Jinping, and voiced Beijing’s willingness to work with Pyongyang on resuming multi-party talks on its nuclear programme.