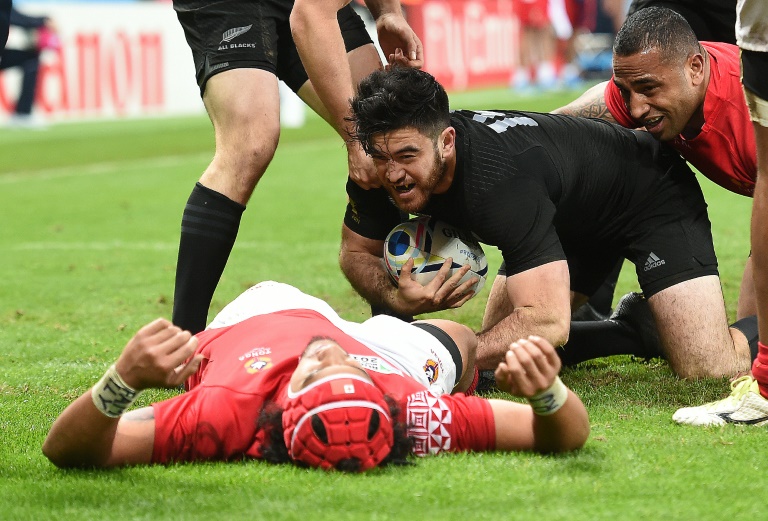 The All Blacks remain short of their champion best and were rattled by the Tongan forwards before some Nehe Milner-Skudder magic set up a 47-9 victory on Friday.

Milner-Skudder scored twice in five minutes midway through the second half at St James’ Park to take the stuffing out of a Tonga side that had valiantly stayed in touch for the first 50 minutes.

The New Zealanders, having already qualified for the play-offs before the game, were looking to polish their rough edges against Tonga.

It was a step up, but still not the completely fluent performance they were looking for as they build towards the business end.

They now know they still have work to do as they wait to find their first sudden-death opponent which will be the loser of Sunday’s match in Cardiff between Ireland and France.

There will be particular concerns about how their forwards again buckled under pressure, as they did against Georgia last week, which Australia would have noted after the way their pack excelled when beating England.

In the backs, most of the passes stuck and crucial tackles were made as they outscored Tonga seven tries to nil.

In the first half, every time it looked as if the All Blacks had Tonga on the ropes, the islanders fought their way back using their powerful pack.

In a dramatic end to the half Tonga were unlucky not to win a penalty try when stand-in All Blacks captain Kieran Read was yellow-carded for collapsing a driving maul.

Tonga, knowing they had the All Blacks forwards under the cosh, turned down a shot at goal in favour of a scrum.

Twice the seven-man All Blacks collapsed under pressure and with referee John Lacey’s patience running out, Tonga opted for one more scrum but this time they tried to shift the ball and came up short.

Richie McCaw, not playing because of a thigh injury, had a lot to say every time he took the field in his role as waterboy.

Tonga made a statement at the very start when they shoved the All Blacks into submission in the first scrum.

They won a penalty which took them to a lineout on the halfway which turned against them.

The All Blacks stole the throw in, moved the ball wide where Milner-Skudder and Conrad Smith took play inside the Tongan 22 before fullback Ben Smith popped up in support for the try.

Tonga came back, with attempts to run the ball not paying dividends they found more success with forward drives down the narrow channel which won them a penalty in the 23rd minute for Kurt Morath to close the gap.

However, the All Blacks frenetic pace was opening gaps although they squandered one opportunity when Waisake Naholo dropped a pass in a three-on-one situation.

But they made no mistake minutes later when Tony Woodcock barrelled over from close range.

After Tonga’s valiant but eventually unsuccessful attempt to drive over on half-time the All Blacks turned with a 14-3 lead.

First strike in the second half belonged to Tonga with a second Kurt Morath penalty.

The All Blacks responded by running Tonga into submission until eventually a hole appeared for Milner-Skudder to scamper over for a try.

He was over again five minutes later, diving on the ball after Beauden Barrett had chipped over the line.

The the score blown out to 28-9, the sting was gone from Tonga allowing Williams, Cane and Nonu to cross the line.