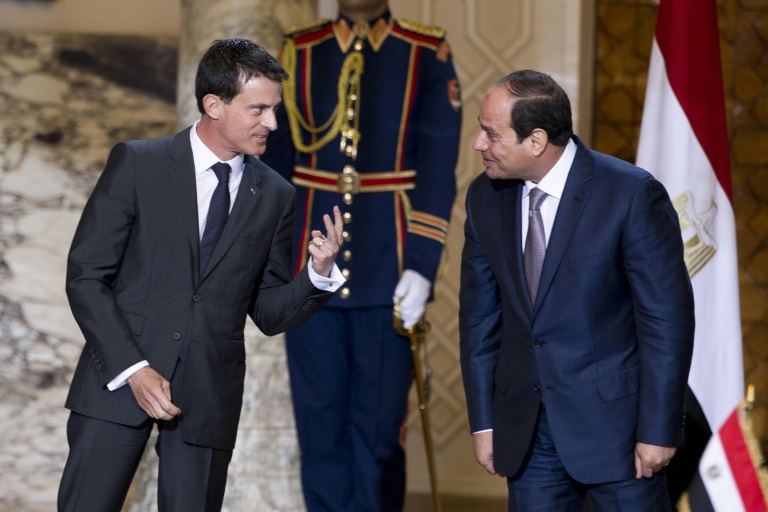 Valls arrived in Cairo at the start of visits to three Arab nations aimed at boosting economic ties and holding talks on regional conflicts, and met with President Abdel Fattah al-Sisi.

He told a press conference: “Egypt is a central partner for dealing with all the crises affecting the region — Syria, the peace process between Israel and Palestine, tensions in Libya or in Yemen.”

He added that France believes that the world needs a “strong and stable Egypt”, concluding that “we all have a common enemy — Daesh”, an Arabic acronym for the Islamic State group.

On September 23, French President Francois Hollande announced he had agreed the sale of the warships with Sisi.

After Valls and Sisi met, a member of the French premier’s delegation told AFP the deal had now been signed.

France originally built the Mistrals for Russia before scrapping their sale over the Ukraine crisis.

However, France found itself in an awkward situation in 2014 as ties between Russia and the West deteriorated over Moscow’s annexation of Crimea and support for separatists in eastern Ukraine.

Paris decided to cancel the delivery in an expensive decision, as it had to foot a bill of more than one billion euros for the ships’ upkeep and the cost of training 400 Russian sailors to crew them.

After months of intense talks, Paris and Moscow agreed on the reimbursement of the original deal in August, with Paris returning 949.7 million euros that Russia had already paid.

According to French government sources, Egypt is to pay 950 million euros for the warships, with “significant” financing from Saudi Arabia.

In February, Egypt became the first foreign buyer of France’s Rafale fighters, in a 5.2-billion-euro deal for 24 of the multi-role combat jets and a frigate.

The Mistrals will be delivered in early March, and the contract provides for four months training in France for some 400 Egyptian sailors, the defence ministry in Paris said in September.

The contract illustrates the rapprochement Paris has had with the regime of former army chief Sisi, who ousted elected Islamist president Mohamed Morsi in 2013 and has since cracked down on his supporters and on all opposition.

Hollande has invoked what he called Cairo’s essential role in the fight against extremism in the Middle East, particularly against the Islamic State group, whose local branch has staged many deadly attacks in Egypt since 2013.

Apart from arms deals, Egypt has also expressed interest in extending the Cairo metro, which was largely built by French companies, and in satellite communications deals.

The conflict in Syria and Russia’s dramatic military intervention, as well as escalating Israeli-Palestinian violence, are also set to figure high in Valls’ talks in Egypt, Jordan and Saudi Arabia.

On Sunday, the French premier is due to meet Sheikh Ahmad al-Tayeb, the grand imam of Cairo’s Al-Azhar University, the most prestigious institution in Sunni Islam.

Travelling on to Jordan, where France has deployed fighter bombers used to strike IS targets in Iraq and Syria, Valls will meet Iraqi Christian refugees in the country, which has taken in 650,000 Syrians fleeing war.

On Tuesday he is due to have talks with King Salman, in a meeting during which Valls’ office said he will request “a gesture of pardon, humanity and clemency” for a young Shiite, Ali al-Nimr, sentenced to death for taking part in 2012 demonstrations.

He will also attend a Franco-Saudi business forum in Riyadh in which 200 companies are taking part.