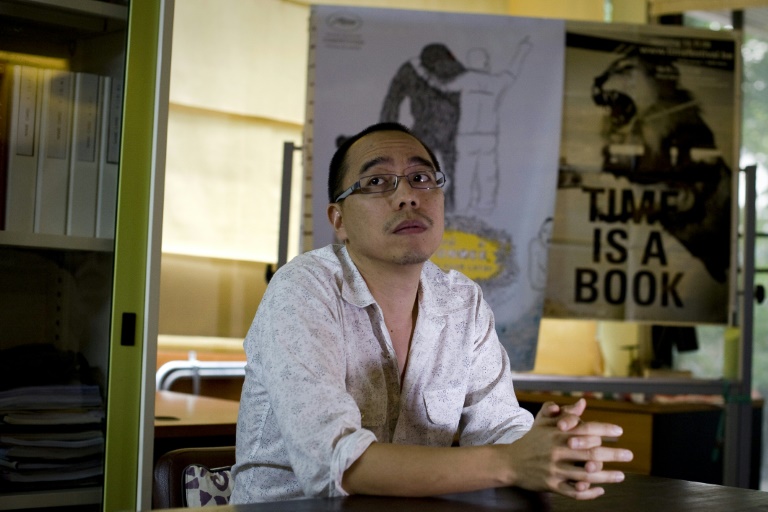 Two of Asia’s leading filmmakers believe moviegoers are set to benefit from the “globalisation” of cinema, which they say will boost the variety and quality of films the world is watching.

“The more filmmakers from around the world work together, the more ideas we will share and the better the content we produce will be,” said Apichatpong.

Apichatpong, winner of the prestigious Palme d’Or at the Cannes film festival in 2010 for “Uncle Boonmee Who Can Recall His Past Lives”, was speaking as the 20th Busan International Film Festival drew to a close.

“We shouldn’t be looking at filmmaking like we do the Olympics, that films come from here or there,” said the 45-year-old, known for his richly atmospheric films.

“Cinema should be global,” he said.

The Thai director was one of four Asian directors to contribute to the “Color of Asia â€“ Masters” collection of short films, which has made its world premiere at BIFF.

Chinese director Wang Xiaoshuai, who won the Silver Bear at Berlin for “Beijing Bicycle” (2001) and has been nominated for the top awards at Cannes and Venice, was another director to take part in the Masters project, alongside Japan’s Naomi Kawase (“Still the Water”) and South Korea’s Im Sang-soo (“The Housemaid”).

“By working together we can learn different ways to tell stories, we can reach a wider audience and we can explore cinema,” he said.

“This sharing of ideas has become more and more common and that is great for the future of our industry, and for audiences, especially in China.”

“Masters” has been produced via the support of the Youku Tudou group, China’s largest online streaming service, which has an estimated viewing audience of around 530 million.

Youku, through Heyi Pictures, has become a major player in the Chinese and Asian film industries, and in the past year has provided financial backing for blockbusters “Monster Hunt” â€“ China’s biggest-ever box office hit – and “The Taking of Tiger Mountain”.

“Cinema wants and needs the new platforms the likes of Youku provide,” said Wang. “We need to find an audience for our films, and sometimes this is hard for independent filmmakers. But we are finding hope as these services reach a very large audience who want more and more content.”

Much of the talk over BIFF’s 10-day run concerned developments in China, the world’s second-largest film market and one that is expected to overtake North America by 2018.

Last year, China collected an estimated $4.82 billion to North America’s $10.3 billion, and mainland media projections are for a $6.28 billion haul this year.

News broke during BIFF that the central government in China had this past week created an official online service to track box office receipts after accusations of box office fraud had been levelled at the country from other film industries.

“There’s a dramatic change going on in the Chinese film market in terms of the type of films being made and the tastes of the audience,” said Yang.

“People are more ready now to embrace this type of film than before.”

Audiences are increasing going online to watch their entertainment, whether that be via traditional platforms or new technology such as smartphones or tablets.

In China alone, industry estimates claim around one third of China’s more than 1.3 billion people use their smartphones for watching films, while globally it is estimated 15 perfect of online movies are now watched on these devices.

While directors such as Apichatpong and Wang were ready to embrace these developments, there was concern shown among other filmmakers gathered at BIFF that the rise of online platforms is affecting the impact of films, and even how they are being made.

“Movies should be part of the communal experience and how can you get that when you are watching a movie on your phone?” asked Indian director Hari Viswanath, whose debut production “Radio Set” was nominated for BIFF’s main New Currents award, open to films from first or second-time Asian filmmakers.

South Korea’s Lee Seung-Won, whose “Communication & Lies” was nominated for BIFF’s major award, and picked up the festival’s Network for the Promotion of Asian Cinema Award, said the worry was that younger filmmakers were more concerned with style than substance.

Online platforms were partly to blame, he said, as they have created a market for shorter productions.

“People are focusing more on the visual images than what the story is,” said Lee. “They think film is all about how to shoot it in a cool style. I think the importance in filmmaking is in the story and the truthfulness in the story and that is something we must protect and encourage.”

The world premiere of Yangâ€™s “Mountain Cry” brings BIFF to a close at the Busan International Film Centre on Saturday night.