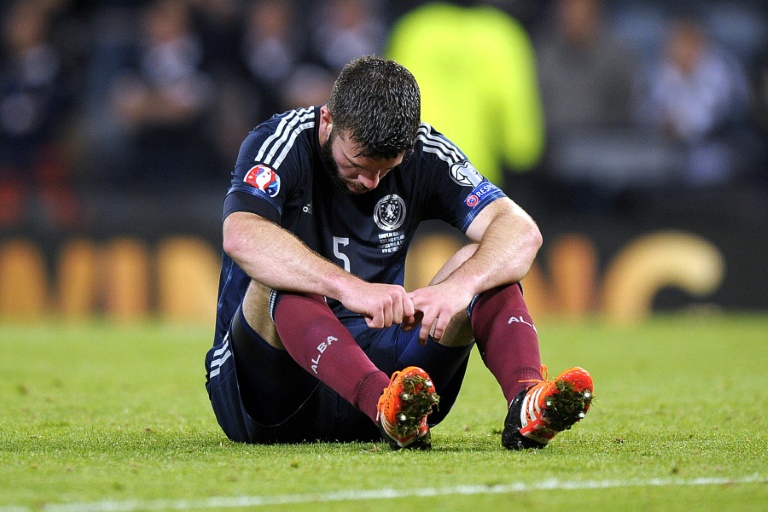 Scotland boss Gordon Strachan refused to be drawn on whether he would remain at the helm of the national side for the 2018 World Cup qualifiers after his side failed to qualify for Euro 2016.

A last-gasp Robert Lewandowski strike claimed a point for Poland in a 2-2 draw at Hampden Park on Thursday which ended Scotland’s hopes of making the finals in France next year.

Strachan, 58, and who has a contract which runs out at the end of October, would not discuss his future in the hot-seat after just two years in charge.

“I really don’t want to speak about that just now,” Strachan said. “For me to talk about myself is all wrong. I’ll leave that to other people.

“There are people in the dressing room who are hurting at the moment and I need to look after them. They, along with my coaching staff, are the priority.”

Scotland’s slender hopes of finishing in third place and earning a Group D play-off place were still alive as they entered the fourth minute of stoppage time after sensational strikes from Matt Ritichie and Steven Fletcher had cancelled out Lewandowski’s third minute opener for Poland.

However, the Bayern Munich striker bundled the ball over the line following a scramble in the box for his 14th goal in the past five matches to keep his side in the hunt for an automatic qualifying spot while sending Scotland crashing out due to Ireland’s shock 1-0 win over world champions Germany in Dublin.

“I am hugely disappointed for the players. I’ve seen a group of lads give as much as they can give,” Strachan said.

“I’ve spoken to them and I’m really proud of what they’ve done. I actually feel a bit sorry for them as they put so much work into that and scored two wonderful goals and they’ve been a bit unfortunate with a few things in the last couple of games.”

A clearly frustrated Strachan added: “You work hard for a year and at the end of that year something like that happens in the last seconds of the game. I can’t remember us getting anything lucky ourselves. Everything we’ve had had to be really earned.

“Over the year we’ve had a couple of offside goals and a couple of horrendous deflections. We’ve had to put up with a lot really and to overcome that then we’ll probably have to become more clinical over the next couple of years.”

Scotland now face a dead rubber in their final qualifying match against minnows Gibraltar on Sunday in what will be their last competitive match until World Cup qualification starts late next year.

Poland now face Ireland in a final showdown in Warsaw needing a win to claim one of the two automatic qualification spots.

Coach Adam Nawalka said he had been surprised at how well Scotland, who also held his side to a 2-2 draw in Warsaw earlier in the campaign, had played.

“There were chances we should have taken, however we have to focus on what has happened,” Nawalka said.

“Although we had done our homework we never thought the Scottish players would play such a fantastic game. Naturally we knew what their strengths were and knew it was going to be a difficult match.

“At the start we were focussed and pushing forward and then things changed. But at the end of the day we were a very determined and impressive side and, despite the challenge, we got the point. If you work very hard you get your luck.”