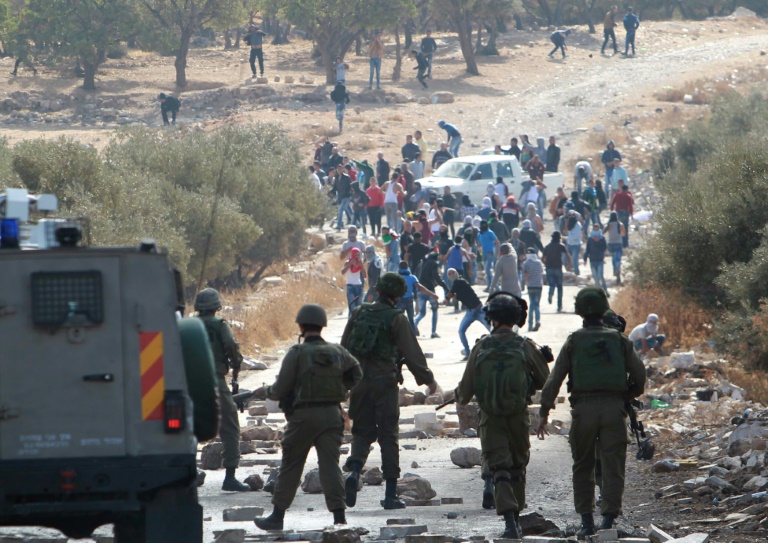 Prime Minister Benjamin Netanyahu pledged firm action Thursday against what he called a mostly unorganised “wave of terror” plaguing Israel and the Palestinian territories but warned there was no “magic solution.”

The unrest has sparked fears that a third Palestinian uprising, or intifada, could erupt.

With a spate of stabbings deeply unnerving Israelis and riots rocking east Jerusalem and the West Bank, Netanyahu vowed to pursue those “who stand behind” the attackers.

“We are in the midst of a wave of terror of knives, firebombs, stones and live fire,” Netanyahu told reporters.

“These actions are mostly not organised, but they are all the result of wild and untruthful incitement from Hamas, from the Palestinian Authority, from several neighbouring counties and, no less, from the Islamic Movement in Israel.”

Four new stabbings wounded Israelis Thursday and one of the assailants was killed as the continuing attacks defied attempts by authorities to contain Palestinian unrest.

A Palestinian was also shot dead by Israeli security forces when clashes broke out in east Jerusalem as they went to search the home of one of the alleged attackers.

Authorities have struggled to prevent the stabbings, with the suspects often young Palestinians believed to be mainly acting on their own.

In Thursday’s first attack, a Palestinian stabbed a 25-year-old Jewish man in Jerusalem, leaving him in serious condition. The 19-year-old assailant, identified as Subhi Abu Khalifah from Shuafat in east Jerusalem, was arrested.

Later in the day, an Israeli soldier and three passers-by were stabbed and lightly wounded in Tel Aviv and the attacker killed.

The suspect, who used a screwdriver, was shot dead by another soldier, said police, who identified him as Thaer Abu Ghazaleh, in his late teens.

In the third incident, a Palestinian stabbed an Israeli near the Jewish settlement of Kiryat Arba in the West Bank, the military said. The victim was seriously wounded and the attacker fled.

An Arab also stabbed and wounded a soldier in the northern Israeli town of Afula before being captured, authorities said.

The stabbings began on Saturday when a Palestinian killed two Israelis in Jerusalem’s Old City, prompting an Israeli security crackdown.

Fresh clashes broke out at the Bet El checkpoint outside the West Bank city of Ramallah Thursday, as well as in Shuafat, where the Palestinian identified as 20-year-old Usama Faraj was killed by the Israelis.

Over the past week, four Israelis have died, along with seven Palestinians, four of them after alleged attacks on Israelis.

According to the Red Crescent, 86 Palestinians have been wounded by live fire and 344 by rubber bullets in clashes since October 2.

Authorities on both sides have wrestled with how to respond.

Far-right politicians are calling for forceful action and security officials, Netanyahu and Palestinian president Mahmud Abbas have sought to avoid an escalation.

Security measures were further tightened Thursday, with at least one metal detector set up in Jerusalem’s Old City at a main entrance and police stationed on rooftops.

Israel also reimposed a ban on men under 50 attending Friday Muslim prayers at the sensitive Al-Aqsa mosque compound in Jerusalem, which is common when tensions flare.

Some Israeli mayors, including that of Jerusalem, went as far as to encourage residents who own guns to carry them around with them.

Abbas spoke again Thursday of wanting “peaceful, popular resistance” and not violence, but many Palestinian youths are frustrated with his leadership as well as Israel’s right-wing government.

In one step intended to calm tensions, Netanyahu has barred members of parliament and ministers from visiting the Old City’s Al-Aqsa compound, which has seen repeated clashes between Israeli police and Palestinian youths in recent weeks.

Provocative visits by Israel’s Agriculture Minister Uri Ariel as well as by Israeli Arab lawmakers have added to the volatility.

But the Arab lawmakers have vowed to defy the order and plan to make a joint visit to the compound, which is the third-holiest site in Islam and the most sacred for Jews, who refer to it as the Temple Mount.

Muslims fear Israel will seek to change the longstanding rules governing the site, which allow Jews to visit but not pray to avoid provoking tensions.

Netanyahu has said repeatedly he is committed to the status quo.

An increase in visits by Jews during a series of Jewish holidays in recent weeks has added to tensions.