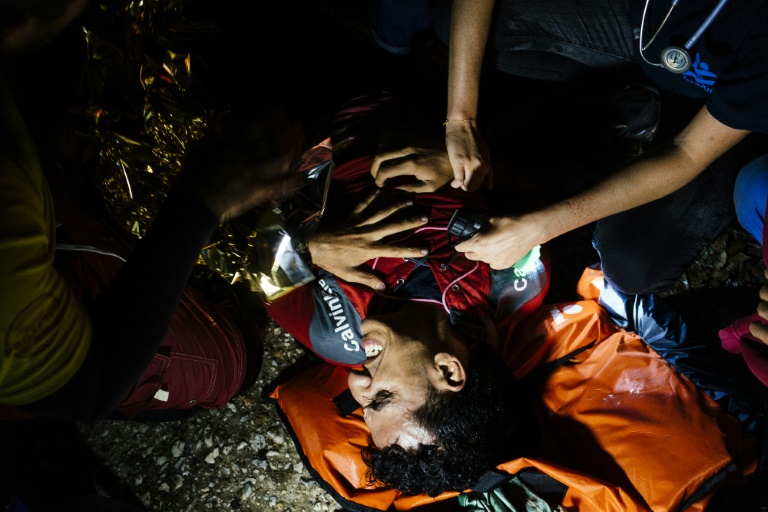 Greece was hit by a huge new surge in migrants as the United Nations Friday approved a European seize-and-destroy military operation against people smugglers in the Mediterranean.

The backing for EU navies to take action against traffickers in international waters came as the first asylum seekers were flown from Italy to Sweden under a hotly disputed relocation scheme to share the burden of Europe’s migrant crisis.

As the 19 Eritreans made their trip, new data emerged showing a massive surge in the number of migrants arriving in Greece to 7,000 from 4,500 a day at the end of September.

With 570,000 people having already arrived in the EU so far this year, the figures from the International Organization for Migration (IOM) underlined the limited scope of the relocation scheme, which seeks to move 160,000 refugees from Italy and Greece over the next two years.

Sweden alone expects to process 150,000 asylum applications this year, Prime Minister Stefan Loven said Friday, adding it may have to house some of them in heated tents.

The IOM said the surge in numbers arriving in Greece “may be due to expected worsening weather conditions”.

And the head of the UN’s refugee agency warned of a humanitarian disaster this winter unless Greece was given much more help to house the new arrivals.

“We know how to organise a camp, a tent or buildings for the winter but what we are not able to cope with is a massive wave of people moving every day. It is impossible. And with the (severe) winter weather in the Balkans there could be a tragedy at any moment,” UNHCR chief Antonio Guterres said.

Grinning shyly before the media, the young Eritreans waved and blew kisses as they boarded a small propeller plane at Rome’s Ciampino airport after hugging members of the Red Cross and UNHCR.

Nearly seven hours after leaving balmy Rome, they touched down in temperatures of two degrees Celsius roughly 100 kilometres (60 miles) south of the Arctic Circle in northern Sweden before boarding a bus bound for an asylum seeker’s centre in Ostersund.

The scheme launched on Friday was pushed through against the objections of several eastern European countries after France and Germany threw their weight behind it.

EU migration commissioner Dimitris Avramopoulos said: “This is a tangible example of what we can do when we work together. We are nations of immigrants and we’ve made an important step forward.”

Alfano said Italy was ready to send 100 more asylum seekers to Germany and the Netherlands, and the UNHCR said further relocations would take place at the beginning of next week.

UNHCR southern Europe spokeswoman, Carlotta Sami, told AFP that Friday’s first flight was a significant moment. “But we know more must be done.”

“There is a great need for measures to be put in place to allow (asylum seekers) to arrive in Europe safely,” she said, referring to perilous boat crossings in the Mediterranean which have cost over 3,000 people their lives this year.

A baby thought to be about a year old was the latest victim, drowning off the Greek island of Lesbos during the night when a dinghy carrying about 55 Syrians from Turkey sank in the dark, Greece’s ministry of shipping said Friday.

The EU’s scheme provides for the relocation of individuals thought to have a good chance of being granted asylum and it has been accompanied by moves to speed up repatriations of those deemed to be economic migrants.

Eritreans almost automatically fall into the first category because of the repressive nature of Isaias Afwerki’s regime in the east African state.

Those relocated Friday had been rescued on the high seas recently and taken to an experimental migrant screening centre or “hotspot” on Lampedusa island, where they were registered.

The centre, which was visited by Avramopoulos and Luxembourg’s Foreign Minister Jean Asselborn on Friday, is one of a number due to be operational across Italy and Greece by the end of November.

On Thursday, EU nations agreed to speed up the deportation of failed asylum seekers and crack down on so-called “economic migrants” — who are largely from poor African nations and not refugees from conflict zones.

The EU hopes the new centres will sharply reduce the number of people who arrive by boat, refuse to be identified and head off across the borders to other bloc countries to seek a new life.