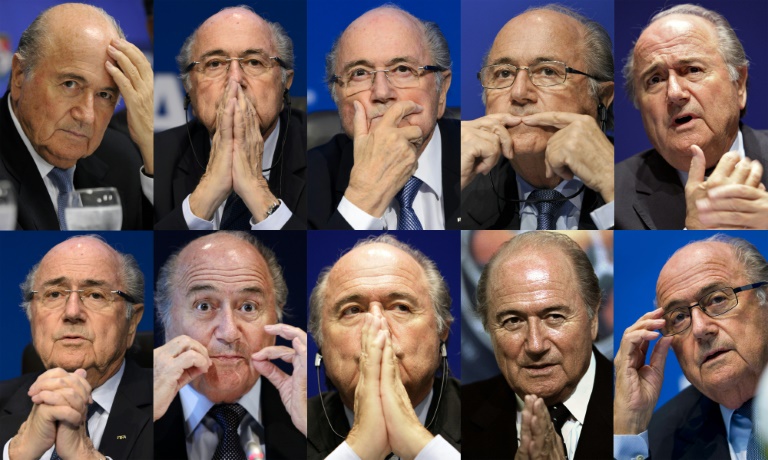 As his scandal-haunted reign running world football came to an ignominious end, Sepp Blatter had become increasingly certain that FIFA rivals, the media, maybe even governments, were out to get him.

Some diehard supporters of the 79-year-old Swiss sports baron even compared him to “Jesus”, being hounded out of office and crucified by his critics in a hateful press.

Others turned to football metaphors, comparing the wily old intriguer to a star striker who had played one World Cup too many.

After months of mounting scandal, FIFA announced Thursday that Blatter had been relieved of all duties after its ethics committee ordered him suspended for 90 days.

The massive scale of the scandal first came to light with the arrest of seven FIFA officials in a Swiss hotel on May 30 — just two days before Blatter’s reelection to a fifth term.

Blatter hinted that the timing of the arrests, requested by US authorities, was deliberate. “It doesn’t smell good,” he said.

“It seems to me that I am being held to blame for all the ills of the world: the destruction of the rainforests, the rail strike in Germany, frequent volcanic eruptions in Iceland, and â€“- it goes without saying — fluctuations on the worldâ€™s stock markets,” he wrote in a FIFA magazine.

“In my 40 years at FIFA I have learned to live with hostility and resentment.

“However as the German language proverb puts it: sympathy is free, but envy must be earned.”

His daughter Corinne, a top advisor to her father, was even more explicit. “It’s not just envy. It’s hatred.”

When Swiss prosecutors opened a criminal investigation against him over mismanagement at FIFA, she told one newspaper: “I am shocked that he is accused of criminal acts. My father is not a criminal.”

From there he entered FIFA in 1975 and began a meteoric rise that saw him reach 70th on the Forbes list of the world’s most powerful people alongside presidents and plutocrats.

Having replaced another deeply controversial long-ruling president, Brazilian Joao Havelange, in 1998, Blatter built FIFA from one small office in Zurich with 10 staff to an organisation employing 1,400 and boasting $1.5 billion in cash reserves.

Blatter says his main achievement has been to make football “universal” — the first World Cups in Asia (South Korea and Japan in 2002) and Africa (2010) came in his tenure. And hundreds of millions of dollars were given to national federations and in development grants.

But since the day he took office, accusations of skulduggery have never been far away from the man at top of the world’s most popular sport.

The latest crisis erupted over the awarding of the 2018 and 2022 World Cups to Russia and Qatar, amid claims of corrupt payments on a vast scale.

In the past Blatter had managed to shrug off controversy — apart from one episode in 2006 when he tried to stop a book on FIFA being published in Switzerland.

Asia and African football federations had also declared strong public support for Blatter but Europe turned against him.

UEFA’s boss Michel Platini — also suspended for 90 days by FIFA on Thursday — once said Blatter had tried to cling onto power because he cannot face a life of “emptiness” without being head of FIFA.

Beset by so much controversy, many outside the sport wondered how Blatter could have survived for so long.

“He has a way of making people dependent or indebted to him, but not in a way that people regret it,” one confidant told AFP. “These people know where they are with Blatter. They don’t know where they will be with someone else.”