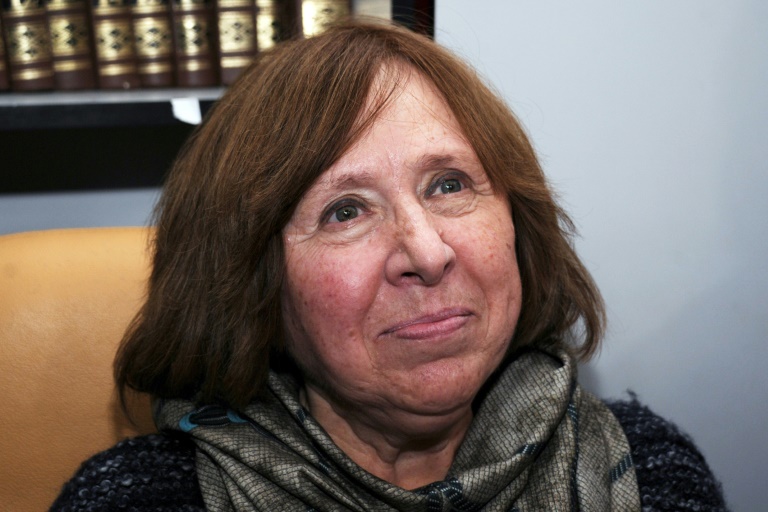 Belarussian writer and dissident Svetlana Alexievich won the 2015 Nobel Literature Prize on Thursday for her work chronicling the horrors of war and life under the repressive Soviet regime.

The Swedish Academy hailed the 67-year-old for writings that were “a monument to suffering and courage in our time” — tableaux of World War II, Chernobyl and the war in Afghanistan, crafted through thousands of interviews.

Belarussian President Alexander Lukashenko congratulated Alexievich for her win, though none of her books is published in her home country amid what the author has described as “a creeping censorship”.

“By means of her extraordinary method — a carefully composed collage of human voices — Alexievich deepens our comprehension of an entire era,” the Nobel academy said.

The author dedicated the prize to her native Belarus.

“It’s not an award for me but for our culture, for our small country, which has been caught in a grinder throughout history,” she told reporters in Minsk, adding that history showed there was no place for compromise when faced with oppression.

“In our time, it is difficult to be an honest person,” she said. “There is no need to give in to the compromise that totalitarian regimes always count on.”

In separate comments to daily Svenska Dagbladet, she said the prize would help the fight for freedom of expression in Belarus and Russia.

“I think my voice will carry more weight now… It won’t be so easy for those in power to dismiss me with a wave of the hand anymore. They will have to listen to me,” she said.

But she tore into Russia under President Vladimir Putin.

“I do not love Beria, Stalin, Putin… how low they let Russia sink,” she said, referring to the former Soviet leader and his head of the secret police.

Late Thursday, Belarus’s Lukashenko congratulated her on her award.

“I am sincerely happy for your success,” he said in a statement. “I really hope that your prize serves our state and the Belarussian people.”

Alexievich, only the 14th woman to win the prize since it was first awarded in 1901, had been the top choice among literary observers and bookies.

The last woman to win was Canada’s Alice Munro in 2013.

“She has invented a new literary genre where she transcends journalism. Others have been there too but she expanded it,” Danius said.

She has seen her works translated into numerous languages and has scooped several international awards.

She began tape-recording accounts of female soldiers who took part in World War II while she was working as a local newspaper reporter in the 1970s.

The resulting book, “War’s Unwomanly Face”, was long barred from publication because it focused on personal tragedies and did not emphasise the role of the Communist Party. It was finally published in 1985 under the perestroika reforms.

Alexievich later used the same technique of first-person testimonies to document the despair of mothers who lost their sons in the Soviet invasion of Afghanistan — in “Zinky Boys”.

And in 1998, she published “Voices From Chernobyl”, a collection of horrifying accounts from people who had worked on the nuclear clean-up of the 1986 disaster. The fall-out affected Belarus more than any other country.

Her most recent book “Second-Hand Time” — a non-fiction work examining the legacy of the Soviet mentality over 20 years after the collapse of Communism — scooped France’s prestigious Prix Medicis essai in 2013.

Since Lukashenko came to power in 1994, Alexievich’s books have not been published in Belarus and she has lived most of her life on writers’ scholarships in Italy, Germany, France and Sweden.

For winning the prize however, Alexievich takes home eight million Swedish kronor (around $950,000 or 855,000 euros).

She has openly criticised Lukashenko’s tight control of Belarus under a Soviet-style economic system and the country’s continued use of the death penalty.

She has also weighed into the debate over the crisis in Ukraine by praising protestors who ousted Kremlin-backed leader Viktor Yanukovych in February 2014 for trying to shatter the links with the country’s Soviet history.

The author has however angered the literary and intellectual elite in Belarus by writing in Russian, not in the Belarussian language, amid a strong drive to revive national culture and language.

Alexander Lukashuk, the director of Radio Svaboda, the Belarussian service of the Prague-based Radio Free Europe/Radio Liberty, said Alexeivich’s Nobel had stolen the spotlight from Lukashenko.

“All of a sudden it stole all the limelight from Sunday and pushed it on somebody different, and somebody who maybe is not (in) direct opposition to Lukashenko but of course she professes very different values, freedom of speech, freedom of expression, democracy, support for the Belarussian culture,” he said.