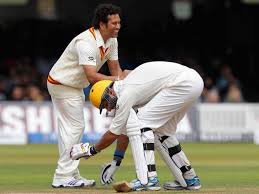 MUMBAI: Yuvraj Singh is looking at donning the Indian colours and boosting this dream of his is none other than legend Sachin Tendulkar.

Out-of-favour India batsman Yuvraj Singh has revealed that he is determined to make a comeback to the national side, saying that batting legend Sachin Tendulkar’s advice reinvigorated his zest for the sport and helped him go through the toil of the domestic cricket.

“I was speaking to Sachin last year and he said that obviously the most important thing is to play for India but don’t forget to enjoy the game,” said Yuvraj was quoted as saying by ESPNcricinfo.

“As young kids we always played the game to enjoy it, we never knew that we were going to play for India. I enjoy playing cricket and it was always my passion as a young kid, so as long as I am enjoying it, I want to play,” added the 33-year-old, who is set to lead Punjab into their second match of the Ranji Trophy season.

The big-hitting left hander, who was awarded the Player of the Tournament award after India won the 2011 World Cup, has not made international appearance in any format since the World T20 final in April 2014.