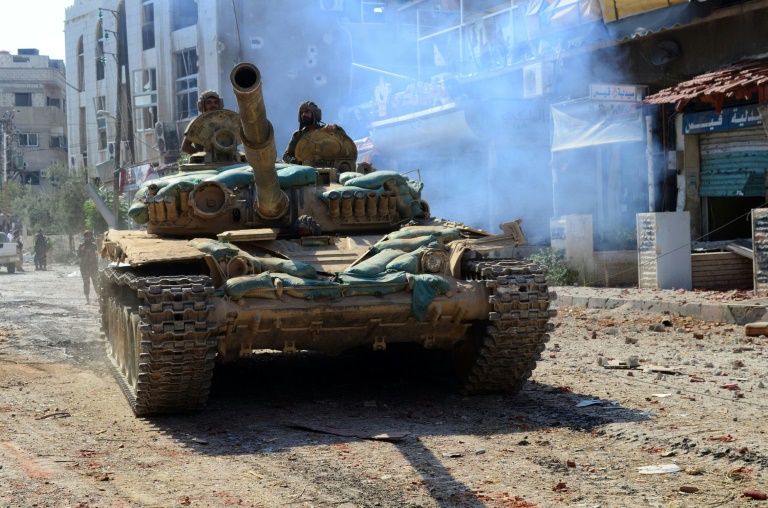 Moscow has dramatically stepped up its nine-day-old air war against opponents of President Bashar al-Assad, with heavy bombing by warplanes and cruise missile strikes from the Caspian Sea.

A Syrian general said the Russian intervention had weakened the Islamic State (IS) jihadist group and other armed opponents of Assad.

But according to Washington, more than 90 percent of Russia’s strikes have targeted the moderate opposition.

NATO Secretary General Jens Stoltenberg said there had been a “troubling escalation” in Moscow’s air campaign.

“We will assess the latest developments and their implications for the security of the alliance,” Stoltenberg said as he went into a NATO defence ministers meeting in Brussels dominated by the Syrian crisis.

“This is particularly relevant in view of the recent violations of NATO’s airspace by Russian aircraft,” he added.

Tensions between Russia and NATO member Turkey shot up this week after Russian aircraft infringed on Turkish airspace at least twice.

The Russian air war has provided cover for Assad’s ground troops, who have previously lost swathes of the country to IS and other fighters seeking to topple Assad.

He did not specify where the operation would take place, but said Russian air strikes had helped “weaken the fighting capabilities of Daesh and other terrorist groups,” using the Arabic acronym for IS.

Moscow carried out new air raids Thursday on Assad’s coastal heartland of Latakia as well as the central province of Hama and near the northwestern city of Idlib, according to a monitoring group.

Russian bombardment came in support of a ground assault by Syrian troops and allied militia seeking to push back rebels from the Sahl al-Ghab plain in Hama, the Syrian Observatory for Human Rights said.

The plain, which borders Latakia, has been the focus of a months-long offensive by a coalition of Islamist and rebel forces including Al-Qaeda’s Syria affiliate.

A military source on the ground in Sahl al-Ghab told AFP that Russian air strikes had targeted at least three villages in the area on Thursday morning.

Since September 30, Russia’s air force has been conducting aerial strikes throughout Syria on targets that Moscow says are held by IS and “other terrorists”.

But Islamist fighters, rebels and their international backers insist that most of the areas targeted by Russia are not held by IS, also known as ISIL.

“Greater than 90 percent of the strikes that we’ve seen them take to date have not been against ISIL or Al-Qaeda-affiliated terrorists,” said State Department spokesman John Kirby.

“They’ve been largely against opposition groups that want a better future for Syria and don’t want to see the Assad regime stay in power.”

In Brussels, Stoltenberg said that NATO was ready to deploy forces in key alliance member Turkey if needed after the airspace violations by Russian planes.

NATO has stationed anti-missile Patriot batteries in Turkey to protect it from any spillover from the Syrian conflict, but they are due to be removed later this year.

Asked if NATO would consider extending their mission in light of the Russian missile attacks, Stoltenberg said: “NATO is able and ready to defend all of the allies, including Turkey.”

On Wednesday, Moscow upped the ante dramatically by launching a series of cruise missile attacks and providing direct air support for a Syrian army ground attack for the first time.

That ground operation targeted the village of Latmeen in Hama province, east of Sahl al-Ghab.

According to the Syrian daily Al-Watan, which is close to the regime, the army captured Latmeen and at least 10 other villages.

“These operations occurred with support from Syrian and Russian planes, and resulted in retaking control of 70 square kilometres (27 square miles),” a source on the ground told the daily.

At least 13 regime fighters and 11 rebels were killed in clashes, the Observatory said.