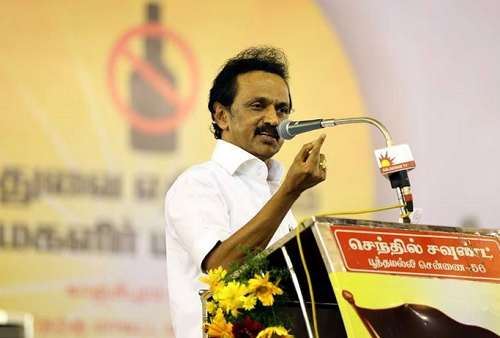 DMK treasurer M K Stalin allegedly slapped an autorickshaw driver who tried to take a selfie with him near here with visuals suggestive of the incident going viral on Thursday.

Stalin was on his second leg of his Namakku Naame (we for ourselves) in Gudalur, about 70 km from here, yesterday afternoon when the incident occurred.

The burly autorickshaw driver came close and tried to take a selfie with Stalin, who was mingling with the public and receiving petitions from them.

In the melee, the autoricksaw driver was about to fall on him when Stalin allegedly slapped him.

A video of the incident went viral in social media today.

However, local DMK workers claimed their leader had just tried to protect himself and had pushed him as the driver was about to fall on him and was not what it was made out to be.

This is not the first time that Stalin is allegedly involved in such an incident.

On July 2, Stalin had denied slapping a fellow passenger on board a metro train after visuals suggestive of the incident went viral.

“I did not slap him, I only gestured him to move away from a woman whose feet was being trampled by the passenger. My hand (inadvertently) touched his face while gesturing”, Stalin told PTI when asked on the issue.

Video footages of Stalin allegedly slapping the passenger in the metro train the previous day during the launch of the Chennai Metro had gone viral and Tamil Nadu Chief Minister Jayalalithaa had condemned the incident.