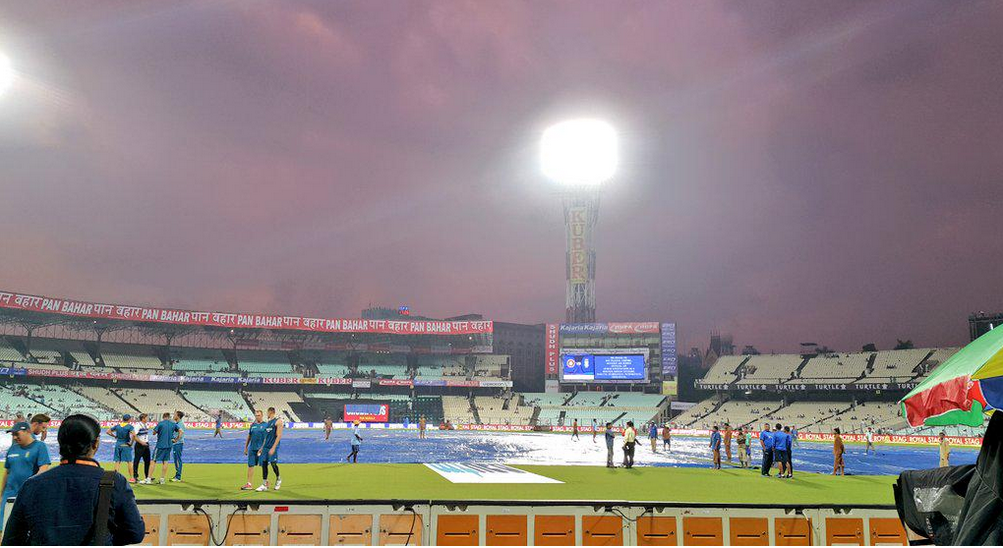 The third and final T20 international between India and South Africa was tonight abandoned without a ball being bowled because of a wet outfield, allowing the visitors to clinch the three-match series by 2-0 margin.

The abandonment of the game after just a passing evening shower again showed the poor drainage system of the iconic Eden Gardens as the umpires called off the match post their 9:30 pm inspection much to the dismay of the few thousands, who had come to the ground to watch in expectation of an exciting encounter.

The failure to start the match even after seven hours also potrayed Cricket Association of Bengal in a very poor light as the match could not be started despite using three super soppers. Veteran curator Prabir Mukherjee’s role has also come under scanner as the outfield was not covered despite the forecasts of a passing shower and knowledge of the stadium’s dubious record in times of rain interruptions.

For the record, the Alipore Met office recorded 14.22 mm of rainfall between 1pm and 2.30pm and the CAB authorities had more than five hours time to get the ground ready.

“The rainfall at the Eden Gardens however can be less or more but we cannot ascertain that as we don’t have any instrument there,” regional Met director GC Debnath told PTI blaming the rainfall on the low pressure formation in Bay of Bengal.

But as it turned out after three rounds of inspections at every hour’s interval beginning with 7.30 it was about delaying the inevitable — another abandonment with little or no rain.

It was also an ominous start to the new CAB management under president-designate Sourav Ganguly after the demise of Jagmohan Dalmiya September 20 as their efficiency would be up for a serious scrutiny with the hallowed venue slated to host the final of the World Twenty20 next year.

Surprising as it may sound but only the match strip and the two practice pitches on both the sides of the dressing room were covered during the spell of rain despite the fact that the Eden has the option to fully cover the ground.

Minutes after the rain subsided in the afternoon, the former India captain and now CAB supremo Ganguly was seen taking a stock of the situation of the ground with his denims rolled up.

But the harsh ground reality remained that the Eden was staring at another washout, despite no or little rain as BCCI promptly wrote in their Twitter feed: “Despite the lack of rain of late, the umpires aren’t happy.